Following a succesful run at The National in 2016, Michael Longhurst‘s production of Peter Schaffer‘s Amadeus returns with a high level of fanfare. Having missed it first time around, I arrive with few expectations, my only familiarity with this play being Milos Foreman‘s 1985 film adaptation. 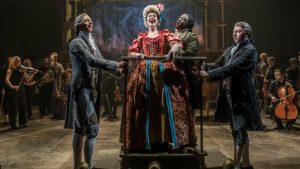 The production’s most distinctive feature is the on stage presence of the Southbank Sinfonia, who, as well as providing orchestral accompaniment also merge with the ensemble cast to further animatate the busy on stage action. It’s a spectacular visual and although the choreography is occassionally clunky, with some slightly off comic timings, their intergration generally serves to effectively heighten the personal drama without distracting from it.

The play centres on court composer Antonio Salieri (Lucian Msamati) and his bitter struggle to affirm his position and sense of artistic self-worth in the face of Mozart’s prodigious talents. Msamati offers a near flawless performance, complex and multi-layered with a virtuosic instinct for discovering the subtle comic counterpoints in Salieri’s anguished desperation. He embraces the audience as confidants early on and Msamati quickly evokes a powerful sense of intamacy, no mean feat when faced with the packed environs of the Oliver Theatre. His scathing monologue vowing vengeance against God is a particular highlight.

Adam Gillen reprises the role of Doc Marten clad iconclast Mozart, playing him with a hyperactive, lisping petulance reminiscent of a young Rick Mayall. Gillen’s energetic swinging between bravado and bashfulness is an exhilerating delight at first, but in time begins to grate. The cartoonish choreographed precision of his physicaility gradually revealing his characterisation to be based in affectation, which only serves to obstruct the expression of Gillen’s evident depth of feeling at points of genuine emotional frialty.

Adelle Leonce joins the production as Constanze Mozart and offers a forceful and thouroughly convincing mix of stoicism and niavety. She finds a staggering, raw emotional power at the play’s climax, maintaining a commanding presence despite the orchestral crescendo behind her.

Unsurprisingly Mozart’s music plays a major role throughout and the bombastic musical set pieces are well executed and imaginatively staged. Salieri and Mozart’s first meeting, where Mozart plays back Salieri’s musical tribute to him from memory – shamelessly embellishing his piece – is a standout moment of comic character development.

It is testament to Schaffers play that the internal conflicts of one man can prove so engaging over three hours. The production more than succeeds as a grand manifestion of Salieri’s mental decline and is a sensory feast on an epic scale. However for me the production’s greatest strength is it’s surprising lightness of touch, balancing high drama with a welcome dose of tongue in cheek humour which, combined with some magnetic performances elevated this enjoyable production to something highly memorable. 4/5

Amadeus is currently showing until Tuesday 24th April 2018 at the National Theatre. To find out more about the production, visit here…