Rita, Sue and Bob Too @ The Royal Court Theatre Review

Will they? Won’t they? The drama surrounding the announcement, subsequent cancelling and then re-commissioning of the Royal Court’s revival of Andrea Dunbar’s seminal play Rita, Sue and Bob Too has been the theatre talk of the season. 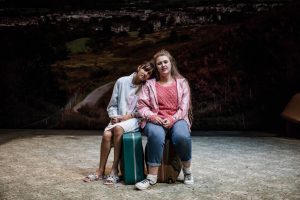 Courtesy of the Royal Court Theatre.

Vicky Featherstone was right not to put an outright ban on a female working class voice, her volte-face decision was commended amongst theatre critics. Rosemary Waugh from Exeunt beautifully summed up Featherstone’s strength in reconsidering, saying her decision ‘refuses to accept that re-evaluation is weak – when in fact we could do with more leaders demonstrating self-reflection…’ The strength of the female voice is omnipresent in Dunbar’s work, but this revival leaves a puzzling bad taste.

It is often hard to see where director Kate Wasserberg, now sole artistic director of Out of Joint since MSC’s departure, wants to take this piece. After seeing her direct  Seanmhair at Fringe last year I have exceptionally high hopes for Rita, Sue and Bob Too. Covering similar themes, Seanmhair was a brutally honest tour-de-force of gutsy sexual discovery and abuse. Dunbar’s writing offers a similar frankness that could easily be flipped on its head, taking the play from ‘cult comedy classic’ to candid, dark tragedy. It’s a shame that it never quite reaches the darkest depths of what is needed in this post Weinstein/Spacey era. Nevertheless, Wasserberg has assembled an outstanding cast that delivers. Particularly Gemma Dobson, whose stage debut as Sue shines a towering light throughout. Taj Atwal is equally accomplished, playing the apprehensive Rita with a naivety that plays to the character’s immature age. Atwal and Dobson get the balance just right with their comic delivery, especially during the scene where they mock Michelle (Samantha Robinson) for not wanting to wear a bra.

Dunbar’s writing has a sharp comic glare, lines like ‘she’s the only woman I know that can burn a salad’ roll out with ease. But behind the comedy it’s the dreams and ambitions that float like clouds that keep the girls strong- steady boyfriends, escaping to London, a life away from their parents, all of which are a far cry from their Bradford council estate.
James Atherton as Bob exudes that typical lad about town charm that would entice two lost girls with ease. Youthful, charismatic and handsome with an undeveloped sense of what’s deemed appropriate behavior.

Emma Laxton’s sound design frames the play with a sinister undertone that gives the performance the gravitas it needs. Distorted versions of 80s classics, like Bowie’s Ashes to Ashes, feels disconcerting and allows the unsettling nature of the plot to boil over.

What has always jarred me about Dunbar’s story was how she died in the same tragically bleak conditions she grew up in. The Buttershaw estate, which became her sole inspiration was also where she was found dead of a brain hemorrhage. Sadly, there are no rags to riches story that can be told about her.

I’m conflicted in thinking that maybe I’m being overly sensitive here. Dunbar wrote near verbatim of what was said around her as a teenager and the characters of Rita and Sue never quickly shy away from Bob’s advances. But could their coquettish naivety be explored on stage in a way that doesn’t feel like a vampy carry on film?

Bob doesn’t just flirt between the boundaries of acceptable behavior, he disseminates them by asking two underage girls to put a condom on his erect penis. When the stalls erupt in laughter it feels like a smack in the face to all the women who experience sexual abuse still. This revival seems to be just that, a revival that doesn’t underline that these abuses of power still happen forty years on.

The text itself is incredibly dated, the girls giggle about not knowing what a durex condom is, it’s hard to imagine a Gen Z teenager having the same reaction today. Dunbar’s script gurgles with angsty rebellion. Bob spurts ‘There’s no hope for kids today and it’s all Maggie Thatcher’s fault’ which has an itching sense of outdated ‘kitchen sink realism’ to it.

However, these references to Margaret Thatcher beg the question as to what the government is doing today about the countless cases of sexual grooming that happen across the UK. 3/5

Rita, Sue and Bob Too is currently showing until Saturday 27th January 2018 at the Royal Court Theatre. To find out more about the production, visit here…