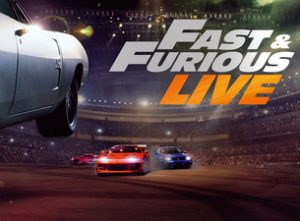 Street racer ‘Sofia’ (Elysia Wren) teams up with ‘Agent Jimmy'(Mark Ebulue) to catch criminal Tyler Cain. Cain is too fast for conventional hardware so Sofia and Agent Jimmy make use of the Mosaic software. Mosaic allows its users to view any point in the past allowing for some of the most iconic set pieces from the movies to be recreated on stage. A giant projector is used to show clips from the movie. The clips, however, are more engrossing than anything else on display. Wren and Ebulue do their best to enthuse a paper thin script but there is little story to speak of.

The set pieces are entertaining. They are technical feats of engineering, craftsmanship and stunt work. Cars fly, explode, race and light up before our eyes, however they feel subdued and slow in comparison to the movie. After a while, it starts to feel like the cars are simply going around in small circles with little variation. The show has an interactive element, the audience help to race and design cars but this element feels half-baked.
At the start of the performance, Vin Diesel comes out and explains the idea behind the show. Diesel explains that he wants to make the audience feel the wonder that the cast and crew feel every day. The show aims to put 20,000 people at the heart of the action, while commendable, I’m not sure if its possible to achieve such a thing and he and his team really don’t manage it on this occasion. There’s no magic here, the show is long, it’s boring and with the cheapest ticket at £35 you’d probably be better off buying the movies on Blu-ray. This show is fast in name only. 2/ 5

Fast and Furious Live was shown from Friday 19th until Sunday 21st January 2018. To find out more about the production, visit here…