Her not Him @ Theatre503 Review

It is important that these stories are seen onstage. Let me make that very clear from the offset. As a bisexual woman with a long-term girlfriend, I understand the necessity of having LGBT+ stories told through artistic mediums, visible, as cultural markers that we exist and have valid selfhoods. It is therefore important that Theatre503 continues to stage these stories, and that playwrights like Joanne Fitzgerald hone the craft of telling them. 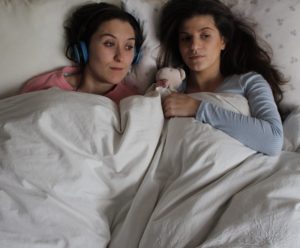 I have less an issue with this script than with its execution. The main character, Bea, played with sensitivity and stage presence by Orla Sanders, is with a younger woman, Ellie (Leah Kirby). It’s not a big deal that either of them are gay, they just are. It is a refreshing fact of this play’s world that this is the case: these women are two people in a relationship living their lives. As Ellie so nonchalantly remarks, people are gay, it’s not a big deal. This idea of personhood, separated from demarcations of gender or sexuality, is essential to Bea’s interactions with Jemima (John James), a woman she meets at her book launch party. When Jemima turns out to be James, however, Bea seems suddenly discontent with the relationship that they have since struck up. The play therefore dramatises the delicate intersection of what it is to be a gendered body, how it relates to an individual’s sexuality, and whether a person can ever be considered holistically as a person regardless of these cultural markings. A particularly effecting conversation takes place between a flirting Bea and Jemima about why the latter chooses to dress as a woman, even whilst she is still a man (in that she has genitalia that she identifies as masculine) underneath. These are critical conversations being played out on this cultural canvas, and Sanders and James have real fizz and warmth to their interactions. There is a similarly interesting conversation articulated in Bea’s discussion of society’s prejudice towards women of a certain age without children. Her relationship with Ellie, however, begins to jar as the latter becomes increasingly transphobic – a characteristic completely at odds with the play’s unsatisfactory ending.

There are flashes of well-timed comedy alongside suitably awkward moments, but the scenes and relationships are not given enough time to mature. Scene changes become somewhat repetitive – despite the effective use of rolling metal partitions – and the use of physical theatre and dance to signify the development of relationships, unfulfilled by the dialogue, is, at times, uncomfortable and unnatural to watch. It doesn’t add anything, and seems a fruitless gimmick designed to fill the absence of enough text.

Her Not Him has moments, and is important because it renders visible what has been invisible, and articulates what has been silenced. It does not shy from the complexities of the topics with which it deals, and is, on the whole, sensitively performed. It needs time to mature as a play, but definitely shows real potential. 2/5

Her Not Him is currently showing until Saturday 3rd February at Theatre503. To find out more about the production, visit here…