Tang Xianzu (1550-1616) is considered to be one of China’s greatest dramatists. A poet, essayist and playwright, Xianzu’s writings are incredibly influential within the Chinese writing canon. In the West, we are made aware of the great works of Shakespeare and Cervantes, Xianzu however, lesser known to us, but a contemporary of both. 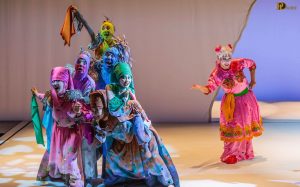 Xianzu’s The Handan Dream is one of his most celebrated works, the premise, Lu, a scholar from an intellectual community must pass his imperial examination in order to achieve greatness as an official. Having failed his exam for the third time, he is disowned by his community and left to his own devices. With nothing other than a donkey to his name, he stops by an inn, where he is given a magical pillow that sends him into a deep and eventful sleep.

Directed by Wang Xiaodi, The Handan Dream’s elaborate world is realised on the Hackney Empire stage. Yu Qingfeng and Qu Zhaojie’s are thoughtful in their adaptation of Xianzu’s original text. Speeches are declarative, characters proudly explaining to all who they are and expressing their intentions. A complete juxtapose to the internalised and restrained method of performance we are accustomed to within the West, The Handan Dream is refreshing to watch on a London stage. Performed in Mandarin with surtitles, the main task is ensuring speeches are read and the accompanying action is being watched. Due to the length of some of the speeches, this occasionally becomes difficult and therefore affects how the performance is experienced. Xianzu establishes a continuous world of characters, each character serving their purpose, this in turn however causing confusion as there is an attempt to keep up with the narrative.

Li He’s Lu is loveable, the audience rooting for Lu as he gradually ascends the hierachy, achieving his dream in becoming an official. Typically played by a male, the decision to cast a female lead is a commendable one, He completely owning the role. The tangential nature of Lu’s dream is heightened by the collaborative nature of the cast. Li Rayding’s costume design illuminates the space with a kaleidoscopic energy. Ornate materials and accessories symbolic of a characters standing. Yao Xiaoming’s choreography equips the cast with an understanding of kinaesphere, it’s sublte, but a staple of the evening. 3/5

The Handan Dream was from Friday 26th until Sunday 28th January at the Hackney Empire. To find out more about the production, visit here…