Well the Bridge Theatre is bloody posh. That’s the first thing I think when stepping into the space. Don’t get me wrong it is beautiful, but it feels highly unwelcoming to a working class person. And that’s a real shame, because the auditorium is packed full of young and trendy individuals, however a lot of the spaces offerings are inaccessible to them. 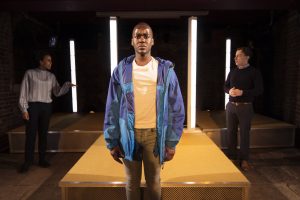 However, I separate my feelings of the architecture from that of the production, and onwards I go into the show. We all know the story: Caesar returns home and people pour out of their homes to celebrate him. Alarmed by his popularity, the educated elite assassinates him, resulting in civil war breaking out. That’s the general gist, and it is interesting to see what take Nicholas Hytner will have on it.

A rock band headed by Abraham Popoola treat us to some reworked classics, as vendors sell beer, caps and t-shirts. The music is great, but this semi-gig-like situation is a weird one to be in. People want to dance, but because of the evident classism, they feel like they can’t, and it ends up with the audience tentatively bobbing like buoys lost at sea.

It’s really hard to concentrate for the entire two hours. If you’re one of those situated in the pit you’re either constantly dodging people’s head in order to try and see; or if you’re lucky to be at the front, then you stand in fear of accidentally being in the way of the platform that’s about to rise from under you.

When this happens the audience are moved in the most awkward fashion by stage management, who are half-heartedly in role as security guards. The audience are reassembled in a haphazard manner, and as new pieces of set are brought in they shyly shuffle like sheep being herded. Bunny Christie‘s design quickly becomes trite.

In all fairness it is performed well. The actors have an excellent grasp of Shakespeare’s text, but that is what you would expect from professionally trained drama school grads. It has its star-studded line up whom all live up to their acclaim. To be honest, it’s just a bit meh, and Hytner’s retelling is basic. There’s no oomph, so whilst it’s not particularly terrible, it’s just not that great – which is the worst type of show to have to endure.

The Bridge is trying to appeal to a more diverse generation, but it all feels a bit contrived. They have the power to lead the charge of inclusivity, but it’s frustrating to step into a place that reaps privilege. More diverse programming and a better emphasis on accessibility are desperately needed. 2.5/5

Julius Caesar is is currently showing until Sunday 15th April 2018 at the Bridge Theatre. To find out more about the production, visit here…