It seems that, despite the ongoing criticism, the Münchner Kammerspiele are doing something right. Two of their recent productions are invited to the 55th Berliner Theatertreffen – Trommeln in der Nacht by Bertolt Brecht, directed by Christopher Rüping, and Mittelreich with an all-black cast, based on the novel by Josef Bierbichler and the production by Anna-Sophie Mahler, directed by Anta Helena Recke. Only ten outstanding productions from theatres all over Germany are chosen every year. (Reviews of both productions can be found on this website.) 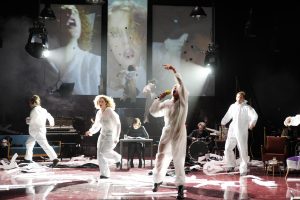 Wut (Rage) by Austrian author Elfriede Jelinek is another production that should not be missed. Jelinek wrote the play as a response to the terrorist attacks in Paris in January 2015, when eight members of the editorial team of the satirical magazine “Charlie Hebdo” were murdered, followed by another murderous attack on a Jewish supermarket. Jelinek describes these acts as the terror of rage – “narcissistic self-empowerment that sweeps away all doubts and any feeling of powerlessness with the cry, ‘This is our moment now! You had your time, now our time has come! Look here and die!’”

The play uses a polyphonic choir of rage which is not limited to the voices of IS terrorists but also entails those of enraged Germans who express their anger by voting for AfD (Alternative for Germany) or following Pegida (Patriotic Europeans Against the Islamisation of the West) as well as other upright Europeans who create “shit storms” on social media. The play even includes the fury of the antique demigod Heracles who extinguishes his own family in his delusion, evoked by the goddess Hera. Yet there is also the private rage about a partner’s betrayal, and the author’s very own rage against those who won’t oppose the terror of rage, against populists and demagogues, and the rage against her own inability to make the indescribable in her writing comprehensible.

Wut is the eighth artistic cooperation of Elfriede Jelinek and Nicolas Stemann, resident director at the Kammerspiele and Nicolas Stemann is present to introduce the play, which seems to have become even more relevant since 2015 as the positions between the different factions have hardened and the debate is entirely emotional, immune to any kind of reasoning. Stemann thinks that rage has become the predominant climate in our society. Jelinek talks about an “era of destructive rage” as opposed to a time when reasoning with each other and discussions still mattered. Today, resentment and hate seem to have won, the new goal being the total annihilation of one’s opponent, fuelled by blind rage.

Nicolas Stemann sees his production as a work in progress and his cast, composed of seven actors (Zeynep Bozbay, Thomas Hauser, Jelena Kuljić, Daniel Lommatzsch, Annette Paulmann, Julia Riedler, Franz Rogowski), work in a kind of laboratory on stage (design by Katrin Nottrodt). They are supported by two musicians (Thomas Kürstner, Sebastian Vogel) with Nicolas Stemann joining in as a singer or on the guitar at times. Claudia Lehmann uses anything from selfie sticks to phone cameras to constantly film the cast. The images are projected on various screens, along with slogans, such as “War against Terror” in different languages, and images of assault rifles.

The production is a mix of a rehearsed reading, performance, clowning, and satire. Guns and religion feature heavily in this performance as the choir chants: “The shell moves out and death moves in”, whilst reloading their AK 47s. There is little sympathy with the victims in the supermarket. After all they were not armed when they went shopping. And they were also praying to the wrong god: “Everybody believes in God but only some believe in the correct one.” There is even less sympathy with victims on other continents: “Today the killings took place over there.”

Originally running at a length of 7 1/2 hours, the text was cut down to 3 1/2 to 4 hours without an interval. Yet there is a break after 1 3/4 hour when people may leave and get food and drinks, which – an exception in the Kammerspiele – they are allowed to bring back into the auditorium. During part of the break, Nicolas Stemann discussed the headlines of the daily newspapers to show the triviality of the news, especially in the tabloids: “How cosy is Munich?” This scene went on too long but it was still entertaining.

Yet there are many highlights in this production. After a group of naive teeny girls, all ready for self-sacrifice, bring us the voice of the young generation, telling us about how beauty hurts, we learn about a new faith app. A virtual shit storm takes place as the cast hurl fake faeces at projections of their opponents: “Blindness is all when you are in a rage.” Actors, dressed up as clowns hand out flowers and wreaths to each other, then to the audience whilst expressing their hatred. My personal favourite scene was Jesus, bearing his cross, inviting other gods to his home – Buddha, Ganesha, Zeus, Santa Claus, and the Flying Spaghetti Monster. Seated on a comfortable sofa, the Spaghetti Monster shares some of his commandments, Jesus mentions that what he does best is walking on water, and Buddha explains that thinking, waiting and fasting is really his forte. But one god is sorely missed – Mo!, who is not allowed to show himself, so the other gods graciously share a selfie with him.

Although Elfriede Jelinek’s plays are not for the faint of heart, Nicolas Stemann’s production, benefitting from an excellent cast, makes the most of the text and brings out the many different layers to great effect. 4/5

WUT will next be shown on 16 March 2018. For more information on the production, visit here…