Albert Camus’ novel The Stranger was published in 1942. It tells the story of the Frenchman Meursault who shoots an Algerian Arab. The victim remains nameless. His only raison d’être is serving as Camus’ tool for developing his existentialist philosophy whilst the victim is treated with benign indifference. The Algerian journalist Kamel Daoud decided to give the anonymous victim a name. In his debut novel The Meursault Investigation (2013), he retold the story of The Stranger – from the victim’s perspective. 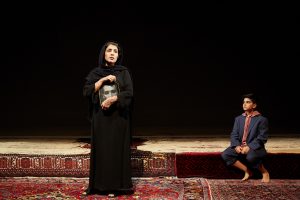 Kamel Daoud’s novel mirrors The Stranger, continuing where Camus’ novel finishes. The Mersault Investigation raises questions about western values and at whose expense they are lived. By giving the victim a name – Musa, Daoud is reclaiming his humanity. The novel focuses on Musa’s brother Harun who keeps living in his elder brother’s shadow. His mother won’t believe that Musa is dead although the killer has confessed the crime. She cannot mourn her son without a body. Her world stopped when her oldest son disappeared.

Using stylised, poetic images, Koohestani tells the story of Musa’s brother Harun and his mother. There are three Haruns on stage – Harun as a child, as a young man, and as an old man. The ageing Harun looks back at his life, remembering important events as they unfold on stage. He communicates with his younger selves, and the dead converse with the living.

The stage is covered with Persian rugs, it consists of three steps and looks like the interior of a mosque (stage design by Mitra Nadjmabadi). A woman, dressed in black, approaches the audience, holding a photograph in her hands. She begins a monologue in Farsi about the disappearance of her son Musa who was allegedly murdered. But his body has never been found, there is just the murderer’s confession. Musa’s mother (Mahin Sadri) asks the audience if anybody has seen her son. It is an angry monologue, filled with grief. Locked inside her pain and her thirst for revenge, she also keeps her son Harun in a stranglehold, preventing him from living his own life. The mother is not satisfied that Musa’s murderer was executed, she wants blood revenge.

Harun’s mother repeats her monologue several times during the performance, but nobody understands her. She is excluded from the world of the powerful because she does not speak or read the language of the masters, just like her son Musa who remained anonymous, a nameless illiterate. Her younger son Harun has learnt French to use the colonial language as a weapon and exact his mother’s revenge. He will speak for his brother Musa and eventually kill a Frenchman named Joseph to avenge his brother’s life, but Joseph’s death will remain inconsequential and will not lead to Harun’s salvation. The only positive event in Harun’s life is his relationship with the student Meriem (Maya Haddad) who loves him for a few weeks because of his grief. Koohestani illustrates their scenes with delicate, poetic images.

Amir Reza Koohestani draws a dark picture of present day Algeria. Stagnation, hopelessness and religious fanaticism are crippling the country. Kamel Daoud was subjected to a fatwa. One of Koohestani’s most impressive scenes features the old Harun (Walter Hess) in a fierce argument with the Imam (Hassan Akkouch), who threatens and attacks the old man. Whilst the faithful are praying in the mosque, the old Harun sits on the steps, his back turned on his religion. His dearest wish is to storm the minaret, take the microphone and swear as much as his heart desires, even if he was stoned to death afterwards.

A very relevant and timely production with an excellent cast. 4/5

DER FALL MEURSAULT will next be shown on 6 April 2018. For more information on the production, visit here…

The production is in German, Farsi, Arabic and Bulgarian with German and English surtitles.

Amir Reza Koohestani next production at the Kammerspiele will be Die Attentäterin (The Assassin) opening on 9th March 2018.