Phillip Ridley’s collection of gender-fluid monologues sees Georgie Henley and Tyrone Huntley swapping roles between performing three of the six Angry monologues each night. With topics varying from clubbing to calamities, blackholes to bloodshot eyes, the collection shows no real through line of thought or connection, and at times feels like a mashup of potential play ideas merged clumsily together. 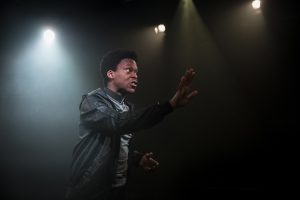 The intimate, in-the-round space at the Southwark Playhouse’s The Little is cleverly utilised throughout the performance, conveying each new setting convincingly despite the relatively contained performing space. The ability of the two actors at transporting the audience to each new destination is a true testament to their acting abilities, both of which are evident from the outset and throughout. On this evening, the monologues are performed in the ‘She Follows Him’ order, with Huntley performing the opening piece. As the second longest monologue in the collection, Huntley produces a charming combination of wit and solemnity in Bloodshot, where his storytelling shines through some questionable writing, which takes us on a encapsulating journey without ending anywhere of importance.

Henley has a tendency to over-perform in each of her performances, with much of her delivery being shrilly, and at times unconvincing. It feels as if Huntley is carrying the majority of the conviction until the collection’s final piece, Air, which lasts half the length of the entire performance. In this mammoth monologue, which feels more like an undeveloped stand alone play, Henley takes on multiple characters, ranging from a 3-year old swimmer to a elderly bookshop owner, whilst telling the tragic story of how she ended up counting down her final breaths in the constraints of a sunken boat. Cassie Mitchel’s seamless lighting design supports these varied settings, taking us from the depths of the sea to watching meteorites fly through the sky through her beautifully imaginative use colours and patterns between the neon lighting grid and accompanying light-up floor. 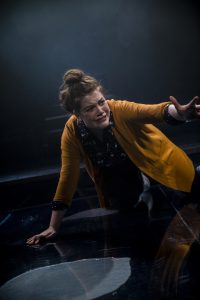 Henley, and several members of the audience, are left visibly emotional following the completion of this demanding performance. I am left feeling emotionally moved, and full of questions, but not in a good way. The performances from Huntley and Henley are undeniably well executed, and Ridley’s fluid structure between who performs which piece each night is interesting, however I feel as if though few of my many questions would be answered through seeing the alternate ‘He Follows Her’ performance. The queries are more deeply rooted in the writing, what its purpose serves, and if it really raiseS or answers any Angry questions at all. 3/5

Angry is currently showing until Saturday 10th March 2018 at the Southwark Playhouse. To find out more about the production, visit here…