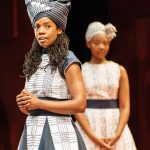 One of Shakespeare’s most popular and iconic tragedies during his time and the modern day, Hamlet is considered to be the ultimate tale of revenge. Simon Godwin’s adaptation offers a unique take on the narrative, his production drawing on various African influences ranging from the West to South Africa. Taking on the role of Gertrude, Queen of Denmark; Lorna Brown speaks to Theatre Full Stop about how she’s approached taking on the complex role as well as tackling Shakespeare’s rich language.

You can be seen in the RSC’s current production of Hamlet, one of Shakespeare’s most celebrated texts. How have you approached taking on the role of Gertrude (Queen of Denmark and Hamlet’s mother)?

In the way that I do most things, I’ve let the text lead me. We had quite a short rehearsal process so I had to do everything rapidly. I found Gertrude quite complex [as] what she has done seems to be quite extraordinary. She was essentially happily married to old Hamlet; she loved her son, she loved her husband and within a couple of months of his death, she is remarried, which is a big thing and remarried [to] his brother in that short space of time. The number one thing I try not to do is judge any character, because then you’re outside of them but try and find the similarities. The way I have approached Gertrude is that there is real love between her and Claudius. For me, there hasn’t been anything untowards that has happened before; she was happily married to old Hamlet, I think she was married when she was very young, there’s an age difference between me and the actor who is playing old Hamlet and I’ve used that in terms of their relationship. It was real love between the two of them but in any relationship, you have to grow together and often if there is an age difference, there are different challenges. I think she always got on well with Claudius and perhaps if she’d met him first, who knows?

What drew you to the role of Gertrude?

I met Simon early last year, we bumped into each other at a coffee shop and he said that he was a fan and he’d said “let’s do a play together!”. Then I bumped into him again later on in the year, outside the Young Vic where I was working and then he called me in for this role. To be honest, when he called me in, I thought “it’s quite a complex role”, because the thing is, she doesn’t say a lot, and I think we have to see Shakespeare’s women in the modern day. I’ve tried to make the silences a choice. I know women like that who sit back and observe and don’t say a lot but when they do, people listen, and he’s been very supportive in that process in terms of status is how people treat you, you can’t demand status. He’s tried to structure it that when the queen speaks, people do listen. I’m interested in the complexity, a woman, a queen who really doesn’t really say very much makes this very interesting decision in her life and I’m not going to lie to you, it’s been very challenging, at times frustrating, at times, painful but I feel like I’m starting to understand who she is as a woman in the modern world and that’s where I’ve placed her.

Simon Godwin’s production addresses the fact that the original text includes a small number of female roles. At present, do you feel that there are enough well rounded female roles depicted on stage or available as an actor to perform?

No, I don’t. I think some of it is to do with writing and as we’ve done in this production, realising that the roles don’t always have to be men, they can equally be women. It is about new writing, and it’s not just about ‘female’, it’s about women of a particular age, it’s about race, it’s about colour, it’s about ability, it’s about sexuality. There’s much work to do, in terms of reflecting the world around us, not just a world that certain people choose to see but the world that is actually around us, there is a richness of stories out there that we need to capitalise on.

This production of Hamlet takes on Ghanaian influences, in a time where the topic of diversity is incredibly prevalent. Do you feel that at present, there is enough theatre reflecting diversity within our society?

There’s more than there was, definitely. I’ll say that we don’t just take on Ghanaian influences, we take on a bit from a lot of cultures. Simon did go to Ghana and there are a lot of West African influences in the play but our movement director/choreographer is South African, so we have stick fighting from South Africa. One of our musicians, his family grew up in Senegal, so we have that musical influence from Senegal, but his family are actually Malian [and] comes from the griot tradition. Our musical director is Nigerian, one of our musicians is white Irish, he’s Liverpudlian, so we have a wealth of influences in this production. My answer is the same as what I gave previousl; no I don’t, I think it’s happening more and more but there is still much work to do, in terms of reflecting the world around us and capitalising on the rich culture that exists around us that are only going to enrich our lives by bringing them to the stage.

What would you like for audiences to take away from your performance and the show?

I can’t decide what they’ll take away from my performance. I guess the number one thing is that they don’t just judge her and write her off as being fickle because that’s why I’m trying to bring a complex woman who’s juggling quite a few plates and also wrestling with her own heart because I feel that there is genuine love for Claudius and genuine love for her so. [She’s] never really been selfish and in some ways, you can see [her] marrying Claudius as selfish but the bigger picture is, it’s also giving stability to the country. It’s painful for her son and I think it’s painful for her to see her son in pain. If there’s anything, and I can’t be prescriptive because I think an audience should come and take what they take, but it’s to see a fully rounded human being as I’d want from any character. From the production, it’s to see the story anew.

How as an actor do you tackle the complex language of Shakespeare?

I always start with human relationships first and I do believe that Shakespeare gives you everything. We’ve had some help, it’s the Royal Shakespeare Company. I met with Simon just before Christmas to got through some of the speeches, he did a great exercise where we just improvised in iambic pentameter. I think the balance with Shakespeare is the bigness of the language and the intimacy of the human heart. I think like it is in any production where you are just continually going deeper with the character, that’s what I’m doing in every performance, trying to seek out where this language takes us, it’s like water, it continues to trickle, it continues to trickle into the streams of your life, your mind, heart and your work. I had a session with a voice coach last week and that really helped me go even deeper with the speech that Gertrude delivers about Ophelia’s death. We have a lot of help but I start with character and the human experience.

What advice would you give to any aspiring RSC performers?

Lorna is currently starring as Gertrude in the Royal Shakespeare Company’s production of Hamlet showing at the Hackney Empire until Saturday 31st March 2018. To find out more about the production, visit here…