There are some really great lines in John Ward’s new version of Electra. ‘No one is innocent’, ‘the cycle must be broken’, ‘God is in the deed’. They throb with a sense of ‘the tragic’, that artistic mode that has permeated cultural thought for centuries, and to which an entire term of study was devoted at the university I attended. 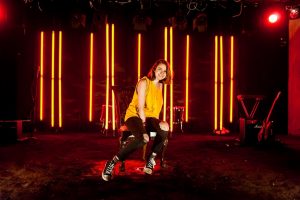 This production is similarly entrenched in tragic archetypes: words, speech and silence; the role of the gods against human intervention; fate; loss; justice; revenge; the legacy of ancestors; family; a sense of time as non-linear. But then, taking on a text as ripe as Electra will – or should – imbue any production with this awareness. Whether this version successfully carries the weight of Sophocles and Euripides on its shoulders, however, remains to be seen.
There are points being made here about contemporary life and politics, about the stupor of power against the swelling dissatisfaction of the disenfranchised young. But they’re not done with any nuance or subtlety, and Ward’s use of rhyming verse starts to jar with me. Lyrical poeticism is appropriate for telling some stories – less so for others. Lyricism is available through lexis and imagery, through a stunning metaphor that tumbles from a character’s mouth as they stand on a blood-spattered stage. The attempts to texturise this text thus never really comes into fruition, clambering clumsily into this play’s vocabulary. This lack of subtlety also translates into performances. Clytemnestra is a complicated figure, with a complicated story, facing impossibly complicated circumstances. Sian Martin’s portrayal haS flashes of brilliance, tempered by an overarching characterisation that – unfairly – reduces Clytemnestra to a villain. The scene where she sits centre-stage, speaking to a well-glossed interviewer about her history, riffs off Robert Icke’s monumental 2015 staging of The Oresteia. It foregrounds the media landscape in which we currently find ourselves, where the cultivation of PR-approved narratives spin stories for public personalities but we have already seen this idea presented through the character of Aesgisthus, a thoroughly modern politician who also lacks a three-dimensional characterisation.

The live music effectively creates atmosphere and develops tonal shifts – the lighting by Sherry Coenen is similarly well designed. Use of earth and soil on the stage floor harkens to Ancient Greek sacrifice and ritual, and a sequence of physical movement and sound that opens the play is particularly strong but some of the best moments are poorly served by the blocking – having a chair in front of one of the more important bits of dialogue completely baffles me – and actors are occasionally stood around onstage, awkwardly waiting for their next line or movement.

Overall, then, this is a solid production, with dynamic flashes, but the script needs some attention. This production wants to incite a call to revolution, but isn’t sure how to properly enact it. Go to marvel at how well this ancient story still reveals something about our modern state. 3/5

Electra is currently showing until Saturday 24th March 2018 at The Bunker. To find out more about the production, visit here…