Rufus Norris‘ Macbeth, his first Shakespeare in 25 years, brings together National Theatre stalwarts Ann Marie Duff and Rory Kinnear as the doomed central couple. Unfortunatly Norris’ audacious interpretation is hobbled by confounding direction and a strangely vague sense of the world it inhabits. 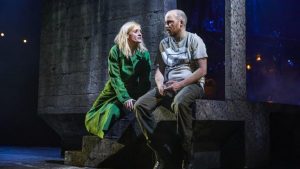 Courtesy of Brinkhoff and Moegenburg.

Set in a modern dystopia of scrapping survivors in makeshift armour and breeze block lean-tos, a wall of black bin bag plastic and an imposing metal ramp allude to a post-industrial wasteland. It is grim and hellish, but littered with design and staging choices that lack the coherence to create a believable world, or the precision to achieve any universal resonance, too often relying on gory spectacle to compensate for its conceptual inconsistencies.

The performances are mixed, Kinnear’s Macbeth is less heroic, rank vaunting soldier of ambition, more lucky grunt who is the best of a dwindling bad bunch. Kinnear expresses Macbeth’s vulnerability effectively and there are flashes of brilliance in his more intimate moments, his initial suspicion of Banquo and the final soliloquay have an undeniably effecting emotional clarity. He also deserves credit for finding moments of much needed levity amongst the constant brutality.

Anne-Marie Duff makes an uncharacteristic misstep in her portrayal of Lady Macbeth, she seems to aim for a subtle emotional credibility which is commendable, however its at the cost of the dominating strength of character that is surely necessary for her actions to be carried through convincingly. She ultimatly proves too delicate a prescence, more brief candle than raging fire, leaving little to remember once extenguished.

The supporting cast are patchy, Parth Thakerar‘s Malcolm is forgettably limp, Patrick O’Kane wrestles valiantly with Macduff’s grief but too often resorts to erratic shoutyness, and Steven Boxer plays Duncan with a bizarre, flamboyant humour that seems completely at odds with his circumstances.

Kevin Harvey gives a solid, likable turn as Banquo and Michael Balogun as The Doctor and Trevor Fox as The Porter give stand out supporting performances, particularly Fox during the difficult “Knock Knock” speech, traditionally played for laughs, Fox plays the moment as a howling, paranoid rant, a frighteningly lucid burst of madness that rings truer than much of the other histrionics on display.

I am generally sympathetic towards the cast as I can’t shake the feeling that the production is working against them, I often have the impression that the actors are wading through the play. This is particularly the case for the Witches, the three giving differing interpretations, Anna-Maria Nabirye is clear eyed and harrowing in her simplicity, the others seemI gotta to flail for ideas in the absence of a coherent, uniting vision.

The lack of substance in the world is made all the more evident by scattered moments of incisive detail, when Macbeth recruits the murderers, plying them with cans of beer from his secret stash, their immense gratitude provides a more potent insight into this pathetic world than 50 acres of shredded plastic ever could.

The lead up to Duncan’s murder is particularly strong, effectively utilising the Olivier’s rotating stage to guide Kinner towards the act, and the first appearance of Banquo’s ghost is chilling. Other sections undo the good work, Macbeth’s demise, which involves a tactically placed trapdoor and an inexplicably shoddy prosthetic is questionably conceived and laughably executed, and may come to be the enduring image of this production for many. There is also some of the clunkiest stage combat I’ve ever seen, including a shoulder barge action used at least twice that I hope to never see on stage ever again.

Norris’s Macbeth is unfortunatly half formed, there are strong moments and I’m sure the cast will find their way through the fog but as it stands there is little to recommend it beyond grim curiosity. 2.5/5

Macbeth is currently showing until Saturday 23rd June 2018 at the National Theatre. To find out more about the production, visit here…