Discontent with the prospect of being incredibly respected and knowledable, due mainly to his studious nature, Faustus seeks more, he seeks a fountain of knowledge all of those around him would envy. Fuelled by greed, Faustus practises the dark arts; signaling the beginning of the end as he sells his soul to the devil. 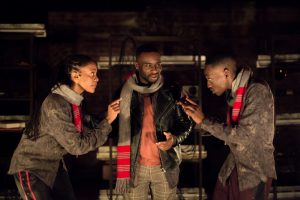 The ultimate ‘selling one’s soul for the continual praise of others’ tale, Marlowe’s Dr Faustus presents a deeply flawed being continually reaching for what he perceives to be happiness. Taking on the tragic narrative is Tangle Theatre Company, who strip back Marlowe’s classic piece and present a young male’s ambitious and arrogant nature slowly removing him from reality. Joshua Liburd’s Faustus is self assured, he has a vivacity that explores Faustus’ need to always be in the know, showing off to those around him. Faustus however is an incredibly complex being, his need to acquire new information, his experimentation with the dark arts, his transformation from mere mortal to powerful being to his inevitable end are all facets that are not truly realised. Mogali Masuku’s Mephastophilis’ serves as a constant reminder that danger lurks. Masuku’s guardian-like presence warning Faustus of what is inevitablely to come. Munashe Chirisa’s Cornelius revels in his quirkiness, every movement heightened for comedic effect, to which the audience appreciate. Masuku and Chirisa support Liburd brilliantly as the Good and Evil Angel, adding an earthiness and soul as all three perform musical sequences together.

Colin Falconer’s cluttered, archaic yet futuristic technological stage design roots Faustus in a land of inbetween. A man who seems himself locked in an earthly normality, who soon acquires a knowledge far more advanced than himself. The Arcola’s brick walls give life to this subterranean, scientific lab environment, Hansjorg Schmidt’s lighting design supplying the production with an exciting layer of technological ideas. Portable lighting panels are manouvered by the cast, in particular Faustus to formulate a magical circle in which he practises his spells, this is subtle, yet magical to watch. Flood lighting upstage is a stark lighting choice that unveils the dark and dingy environment established. Anna Coombs directs an intimate production, a production showcasing the skill set of the three performers presenting this tragic tale. 3/5

Dr Faustus was shown from Tuesday 13th to Saturday 17th March 2018 at the Arcola Theatre. To find out more about the production, visit here…