A sudden symphonic blast quenches the bright chandeliers and the muffled murmuring of the excited audience in the stalls. Then a dismayed silence, soon followed by another thunderous roar of strings responding to the passionate baton of conductor Christoph Altstaedt. It is astonishing how a hurriedly scribbled sheet of notes – inked rapidly on a stave by a gifted Salzburgian lad on the same day of the premiere of his opera – can bewitch a whole theatre, promising to take you on a journey of both laughter and horror. A grumbling faithful servant, a mysterious seductive nobleman, a not so sincere fiancée and an impulsive murder are the starting ingredients to bake the most delicious and libidinous cake you’ll ever taste – anyone fancy a bit of Don Giovanni? 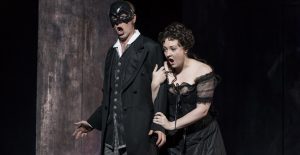 Opera North’s production of Mozart’s darkest masterpiece is a frantic carousel of emotions. From the desperation of a freshly-orphaned woman (Donna Anna) and the heartache of a distraught spouse (Donna Elvira) to the tongue-in-cheek and extraordinarily witty personality of a whimsical yet far too loyal valet (Leporello), the audience is treated to a really vibrant and metamorphic performance. The macho and irreverent protagonist Don Giovanni, played by a libertine William Dazeley, travels like an unsinkable ship through a time machine, rather than wandering around an eighteenth-century Spanish town in search for his umpteenth carnal adventure. I personally tend to prefer a production that sticks to the traditional Don Giovanni setting, however the idea to incessantly dash the tireless womanizer wearing a sinister Victorian coat – almost to symbolise the heartless intentions behind his alluring manners – in whatever age he likes, is a clever way to exhibit the charmer’s untameable influence on literally any living woman.

The famous aria “Là ci darem la mano”, in which Don Giovanni seduces the newly married peasant girl Zerlina, offers an insightful glimpse on this production’s philanderer – a steamy and wealthy orator who would do pretty much anything in order to add another name to his interminable list of conquests. Dazeley plays Don Giovanni with a constant malicious grin, depicting himself as a fascinating yet unscrupulous villain – a proper naughty chap who the men at the theatre admire and to whom the ladies would happily introduce their magic bed in the grip of a hormonal storm. However, there is little to feel sorry about when the spectre of the Commendatore and of Don Giovanni’s anguished abandoned wives despatch the lascivious nobleman to hell. James Platt is an unbelievable Commendatore – the assassinated father of Donna Anna, bald and with an impressive beard, has a superb haunting voice that almost makes me shake in terror like a wild rocking chair. One of the best scenes of this production is Giovanni and Leporello’s nocturnal encounter with the marble statue of the old man’s head, popping out from his grave and scaring the hilarious servant to death. Nonetheless, there is plenty to laugh about as well: exhilarating puppet shows featuring flexible versions of the characters and a splendidly entertaining Leporello (played by John Savournin) with his mischievous mimics and lines.

Stunning cast, brilliant comedy, tearful and emotional singing and Mozart’s sublime music – Opera North’s production of the Don Giovanni has it all. Even if you are not keen on opera, your hands will hurt by the end of the show as a result of all the clapping for this fresh and enjoyable performance. No doubt on the final score – I don’t want the statue of the Commendatore knocking on my door this evening! 5/5

Don Giovanni is currently showing until Friday 23rd March at the Theatre Royal Newcastle Upon Tyne. To find out more about the production, visit here…