Accessories are worn to either compliment or accentuate a simple outfit, they can either be decorative or have significant meaning. The headwrap is a significant piece of clothing, it is more than an accessory, a staple within many cultures, particularly within African culture. The beauty of the headwrap lies within its simplicity in that it starts life as a beautiful piece of material, however it embodies a complexity with its elaborate patterns and the multiple manners in which it can be folded and crafted to create stand out looks. 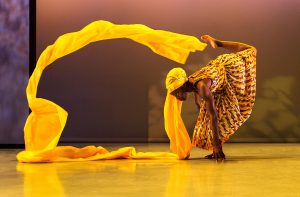 Uchenna Dance’s The Head Wrap Diaries 2016 at the Place

Uchenna Dance celebrate this significant piece of clothing with their crucial piece of dance theatre, The Headwrap Diaries. Commencing the show with an image that immediately etches into the minds of the audience, the three strong cast unravel a headwrap tapestry attached to their heads. Slowly crawling backwards, the cast inform the audience non-verbally that the next hour will be paying respect to the headwrap. The Headwrap Diaries is crucial viewing, especially for young black females as it taps into the conversation of hair that is prevalent within the black community. Bola Abaje’s script effortlessly taps into the role hair plays within societal situations, hence many of the scenes ringing true. The talented cast (Shanelle Clemenson, Sheila Attah and Emmanuella Idris) bring to light the harsh realities of the school experience, especially when it comes to trialling a new hairstyle. As we all know, the school playground can be unforgiving, the cast play on this as one of them finds themselves the object of the others taunts. Although it’s humorous to watch the cast transform into children, the scenario again rings true, the role of hair playing a significant part in shaping one’s formative experiences.

Another stand out scenario witnesses Idris as a young child getting her hair done. This is a staple within African and Caribbean households as either mum, grandma or aunty retouches their child’s hairstyle for the school week ahead. The familiarity established has me laughing from the get go as Idris continually tries to do what ever she can to escape the situation. She however dreams of long blonde hair and playing around all day, a sequence realised by attaching an elongated piece of smooth, yellow material to her head. This sequence is both humorous and deeply saddening as although there is a sense of her using her imagination, she’s questioning her identity from a very young age due to societal expectations, something many of us have found ourselves facing.

The backdrop of the evening is a hairdressers, the cast calling on members of the audience to take their seat on stage, ready for their appointment. Within this backdrop, we witness the cast present a case of a young retail assistant express her love for a weave. Fun in its presentation, as the cast in a triangular formation perform a fusion of West African, whacking and commercial choreography to Clemenson’s exaggerated delivery, the conversation constantly shifts, initially from natural hair to weave and extensions. These nuances are brilliant, I sit watching enthralled by every minute and grateful to see a piece of theatre that truly resonates with me. Although there is audience participation, it is at a minimum, the cast interact with the audience members but this doesn’t detract from the evening’s set up. The audience members also part take in a head-wrapping session, a moment that precedes the evening’s finale of celebrating the beauty of the headwrap. The Headwrap Diaries’ final moments are emotional as they focus on heritage and the regal nature of the headwrap. It acts as a reminder as to just how significant the conversation of hair is and how this, from out formative years until adult-hood can really impact on one’s identity. The Headwrap Diaries is a must watch, Vicki Igbokwe and Ingrid MacKinnon‘s vibrant, of the moment choreography celebrates the influence of Africa’s diversity, sequences invigorate the evening with a soulful energy. 4/5

The Headwrap Diaries was shown at the Albany Theatre from Tuesday 20th until Friday 23rd March 2018. The production is currently on tour until Saturday 14th July 2018, to find out more about the production, visit here…