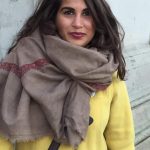 Tapping into the topic of cultural identity, Guleraana Mir’s latest play, ‘Coconut’ explores what it means to be of dual nationality. Pakistani by heritage and brought up in the UK, Mir’s experiences with familial and societal expectations have shaped this timely piece. Read on to find out more about what Guleraana would like for audiences to take away from the show, why she has chosen certain topics to explore and how the New Diorama BAMER programme has supported the show’s development.

Hi Guleraana, your show ‘Coconut’ will be performed at the Ovalhouse theatre in April, how are you feeling ahead of the production?

I am feeling nervous, but very excited. We’ve known that the play will be at Ovalhouse for over a year now, and before that we were working on developing it for almost a year, so it’s been a long time coming.

Coconut explores themes such as cultural heritage, religion, interracial relationships and identity. What drew you to explore these particular themes?

Personal experience – I’m a British born Pakistani married to a white man, much like my character Rumi. Navigating two cultures when you’re growing up is tough, and I developed real identity issues. I’ve never been accepted as truly English, and I definitely wasn’t Pakistani enough for some people, so I struggled to find where I belong. It wasn’t until I started talking about my experiences that I realised a lot of people feel the same way.

I also feel passionately about the fact that culture and religion are different things and often we conflate the two. Rumi pulls Simon up on this a number of times after he converts to Islam, and it is an interesting concept to explore.

You express that ‘Coconut’ is a ‘story you don’t see being told. What would you for audiences to take away from the show?

I’d like audiences of all races, ethnicities and religions to find some sort of empathy with the characters and their situations. Knowing where you belong in this world is never easy, neither is navigating a relationship, so I’d like people to ignore the fact that one character is brown and the other is white to look more broadly at how we treat the ones we love.

Coconut started life as a 15 minute piece performed at the Camden Fringe, and would later go on to be developed on the New Diorama’s BAMER’s programme. How did you approach developing the piece?

We have developed the piece collaboratively, with the various cast members who have been part of the process. Everyone who has engaged with the piece has brought something to it, from their own personal experiences, and that’s what makes this play so special to The Thelmas.

Maddy and I started the process by brainstorming ideas for the full-length play, I went away and wrote a number of scenes and then actors improvised around them. I then rewrote and we did some intense dramaturgy. There is no way I could have pulled it off without Maddy, or explored the world of the play so deeply without the actors. It’s been a real team effort.

The piece revolves around the characters of Rumi and Simon, why have you focused on these two characters in particular?

Coconut is essentially Rumi’s story. She’s where it all started and the catalyst for writing the play in the first place. Simon entered the picture when we started to explore options for the full-length version, and as it slowly turned into a play about their relationship we realised that there wasn’t really much need for anyone else. Although we did end up with a further two characters!

How involved are you in terms of the rehearsal process? Do you find that you constantly make edits?

So at this point we haven’t started rehearsals, but I can say that I won’t be heavily involved. I love attending first read-throughs, but after that it is the director’s job. I trust Maddy and the cast intrinsically to do what needs to be done to get this play on its feet. If that means editing a line here or there, then I’ll leave it to them. If they need me for something a bit more involved then they can find me in the Ovalhouse café tweeting incessantly about how excited I am!

Don’t give up. Find a way to write every day, even if it’s just a few words. Ask yourself why you’re the best person to tell a particular story and how it resonates with your personal experiences. Make friends with actors and hear your words out loud, make friends with a director who understands dramaturgy. Stalk your favourite writers on Twitter and interact with them, and most of all love every single moment of it!

Coconut will be showing from Wednesday 11th to Saturday 28th April at the Ovalhouse Theatre. To find out more about the production, visit here…