Opera isn’t often a go to for parents looking to please disgruntled children during the spring term holidays, but at the Barbican a sold out adaptation of Neil Gaiman’s Coraline proves to be just the ticket for Easter holiday entertainment. 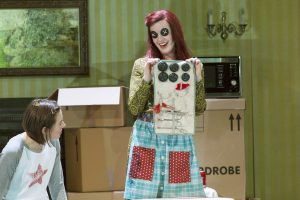 11 year-old Coraline Jones (Mary Bevan) has just moved in to a new apartment and is exasperated by her Mother (Kitty Whately) and Father (Alexander Robin Baker) for not letting her have any fun whilst they’re unpacking.

Coraline eager to explore, meets neighbours Mr Bobo (Harry Nicoll), a deranged trainer of a failing mouse circus and the audaciously camp actresses Miss Spink and Miss Forcible, marvellously played by Gillian Keith and Frances McCafferty. The pair’s vivacity is well received and adds a much needed plummy humour. They tell poor Coraline of the terror that awaits before her.

Bored in the new house, Coraline ventures through a mysterious door to a world that seems to be the exact mirror to her own. This ‘other’ perfect world, where dreams become realities, is soon revealed to not be all that it seems. Coraline discovers the price she has to pay to enjoy such luxuries is giving up her eyes to the Other Mother and having them replaced with buttons.

Mary Bevan’s vocal tenacity is gorgeous, but doesn’t necessarily convey the youthful character of Coraline too convincingly. Kitty Whately as Mother and the Other Mother commands the gothically malevolent character with ease. More triumphant however is Alexander Robin Baker, who plays the role of Father and Other Father with a full bodied humour that perfectly grasps a youthful edge.

Turnage’s score is full of spirit, well tempered but never goes too far, which in part reflects Aletta Collins’ direction of the piece. It’s the lack of crescendo that makes some aspects feel lacklustre, particularly the climax when Coraline beats evil once and for all- which is disappointing giving the dark fantasy aspect of Gaiman’s work.

The story often plods along, but there’s a grimness that offers a few squirms and spooks, aided by deft stage magic from Richard Wiseman and David Britland. We were all left chilled as a severed hand creepily wriggled around the set, a moment of theatrical brilliance that brought the fantasy of the story to life.

Opera is an art form inscribed in phantasmagoric charm, it’s also an art form under appreciated with younger audiences. For a generation consumed by the attention grabbing power of online media, the Barbican’s offering hardly persuades an audience to convert to the thrill of a live stage production. 3/5
Review written by Niall Hunt.

Coraline is currently showing until Saturday 7th April 2018 at the Barbican Theatre. To find out more about the production, visit here…