Following a successful run at The Royal Court Theatre in London, Minefield is back, taking audiences through the untold tale of The Falklands War. Both British and Argentinian actors reveal their untold secrets, facing up to the past and sharing honest memories of this tragic tale of blood, sweat and tears. 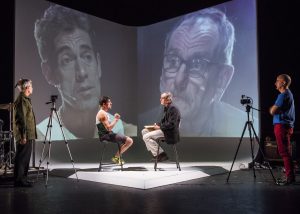 1982. The rise of Thatcherism, the evolution of technological innovation and even the birth of our possible future king, Prince William. However, simmering under the surface we have disgruntlement growing over territory two sides deem to be theirs, soon to hit boiling point. The ten week struggle of fierce fighting, lost life and deep rooted conflict would cost both countries dearly, making the impactful performance all the more eye-opening. Settling the score, and divulging what horrors were hidden by the media to glorify the war effort abroad. The play then leads up to the eventual end in which all these men, after facing the hardships of war, had to go on living at home whilst been physiologically scared by either friends or enemies deaths overseas.

The performance addresses the war through many differing avenues, using lighting, visuals and plenty of loud music to drive the key messages home to the audience. The musical score demonstrates the actor’s talents instrumentally and gives the piece a lift during the slightly heavier moments of political rivalry and personal experiences of life in the Falklands warzone. The lyric ‘have you ever been to war!’ is shouted constantly during the last musical number and unveils the mental trauma war can cause if you have ever actually experienced it. Another attribute of the piece I find particularly interesting is the insight it gives audiences into the relationship between the British military and the Gurkha’s. Gurkha’s were Nepalese soldiers, serving under the British crown for many years, and getting the chance to hear these actors stories is deeply interesting, and gives greater layering to an already jam packed production.

The slightly alarming moment of the entire piece is the gentlemen mimicking Margaret Thatcher with a rubber mask on his face, before standing up later in the piece (with his stockings well and truly on) doing a raunchy sort of striptease. This was said to entertain the soldiers during wartime, however I am sure if that was the real Thatcher the entire military would have cried an overwhelming, ‘no, no, no!’

If you would like to experience a performance with plenty of honesty and incredible personal journeys then this is the piece for you. A true insight into how past war can bring about present day peace! 3.5/5

Minefield was shown from Eednesday 28th to Saturday 31st March at the York Theatre Royal. To find out more about the production, visit here…