When an infamous criminal is incarcerated in a London jail, prison guard Tracey knows she shouldn’t be frantically googling the notorious case. But for Tracey, it’s hard to get away from the story that has hooked the nation. Inside the prison walls life is stagnant and slow, making it the perfect playing field for inmate Siobhan to coerce the easily manipulated. 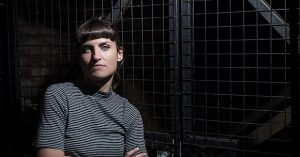 Martin Murphy’s Victim at the King’s Head Theatre is a prompt and witty monologue that offers a detailed close up of life inside an all female prison. Louise Beresford stars in this one hander, and masterfully drip feeds Tracey and Siobhan’s stories through nimble multi-rolling and sharp physicality. Seamlessly merging accents and characterisation, Beresford confidently weaves Murphy’s text and allows her to stand her ground as a rising star of the acting world.

Not necessarily the neatest of texts, Victim has the blueprint to become a lot more than just a one woman show. Murphy’s writing has a gorgeous pulse similar to other female led, ‘warts-and-all’ monologues, think Fleabag and Milly Thomas’ DUST. Where some of the storylines trail off, the majority entwine until the lives of Tracey, Siobhan and the recently imprisoned inmate have become a sticky mess.

A coarse, red-blooded humour runs throughout, which Beresford commands naturally. This comedy is a much needed balm to the tragedy and manipulation that is happening inside the prison walls. We learn of the mistakes that the inmates have made that have led them to life behind bars. Tracey comments that only the dumb end up getting caught, but even she realises how easily one mistake can lead to a catastrophic butterfly effect.

The narrative does conclude quite abruptly, which doesn’t necessarily allow the plot to fully digest. But as a one hander the pace and rhythm of the piece is well thought out and never lulls. Beresford is clearly one to watch and her agility as a performer suits Murphy’s script exceptionally well. 4/5

Victim is currently showing until Saturday 21st April 2018 at the King’s Head Theatre. To find out more about the production, visit here…