Devil with the Blue Dress @ The Bunker Theatre Review

Before Trump, if you wanted big, wham-bam political sex stories you only needed to whisper the name ‘Monica Lewinsky’. Bill Clinton’s highly documented ‘sexual relations’ with the 22 year old White House intern was the scandal that hooked the western world. 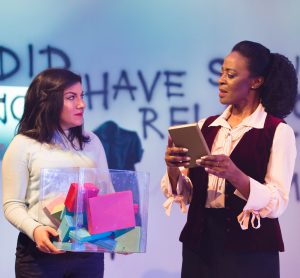 Kevin Armento’s Devil with the Blue Dress takes the story’s power and abuse and throws it around the stage in this almost Brechtian take on the events that built up to the gossip that shook American politics in the late 90s.

The five key figures of the story all have a pop at being the leading lady of the Clinton-Lewinsky scandal. Hillary Clinton, played with characteristically stoney stoicism by Flora Montgomery, argues it out with Monica Lewinsky (Daniella Isaacs), the impressionable young intern whose agency is much the focus of the play.

Aiding and abetting the President is Betty Currie (Dawn Hope) as the former personal secretary to Bill Clinton. Bill’s daughter Chelsea (Kirsty Philipps) gets a look-in too as does Paula Tripp, Lewinsky’s fair-weather friend who released secret telephone recordings of the affair. The latter three all multi role as Bill Clinton, sauntering on stage with the sleaze of a low budget Elvis impersonator and a southern drawl to match.

Throughout Devil with the Blue Dress a saxophonist (Tashomi Balfour) plays smooth jazz accompaniment, sparking with energy at key moments. As the only assigned male cast member, the saxophonist acts as a metaphor for Clinton’s presence in the lives of all of these women. A keen sax player himself, (google image Bill Clinton playing the saxophone for meme-worthy evidence) there was more than just blowing woodwind instruments going on behind the doors to the oval office.

Daniella Isaacs superbly masters the naivety of the young Lewinsky, and luckily for the production, has almost picture perfect features to the former White House intern. The whole cast, as individuals and as an ensemble, are excellent and ground the often meta aspects of the script.

During the first act, Hillary makes references to how the Lewinsky issue ‘will go away’ and there are other comic ironies peppered throughout. There’s a shift by act two, Hillary appears to be marred by the allegations, asking whether if she leaves Bill will she remember who she is without him? Monica’s narrative becomes more inline with the real life Lewinsky’s stance on the issue, that the affair was an explicit abuse of power. Armento’s script argues that Bill’s position of authority objectively abused all the women close to him. Chelsea comments that Betty’s assistance in protecting Bill’s name is an example of his persuasion and that as a humble secretary she is still ‘one of his victims’.

Joshua McTaggart, Artistic Director of The Bunker, does the script justice with well measured direction that keeps a steady pace. McTaggart manages to turn the conceptual and highly speculative script into more manageable chunks for the audience to chew over. Designer Basia Bińkowska, adds drama at every level with her stage design that feels clever but not over the top.

There is however a sense that this script is already outdated. The 90s seem like lightyears ago and it appears no amount of sex scandals can bring down the Trump administration. Armento asks in the wake of #MeToo whether Lewinsky would suffer the same consequences; chances are if the current situation is anything to go by, powerful men have even more powerful ways of protecting themselves. 3/5

Devil with the Blue Dress is currently showing until Saturday 28th April 2018 at the Bunker Theatre. To find out more about the production, visit here…