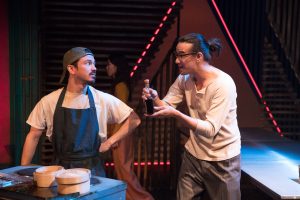 Seeking inspiration from celebrated restraunteur and author Helen Tse’s (MBE) memoir Sweet Mandarin, In-Sook Chappell’s Mountains: The Dreams of Lily Kwokplaces a spotlight on Helen’s grandmother, Lily, a woman from modest beginnings in China who would later establish one of the first Chinese restaurants within the UK, located near Manchester. Her legacy lives on thanks to her three granddaughters, including Helen. Read on to find out more about the creation of the play!

Mountains: The Dreams of Lily Kwokwill shortly start its UK tour, how are you feeling ahead of the run?

I’m really excited that the show will be able to be seen across the country. It’s a fantastic story that hasn’t been told and we’re going to be playing in some great theatres including the Theatre Royal Bury St Edmunds, which is the theatre I went to as a child.

The basis of Mountains: The Dreamsof Lily Kwokis Helen Tse’s (MBE) family memoir Sweet Mandarin. What was it about her story that inspired you?

I was captivated and deeply moved by the character of her grandmother, Lily. A child who was born into poverty with the world against her but her drive and ambition forced her to take chances and change her life. Her strength and resilience is humbling and I fielt that she was a person who had been overlooked. Voices like Lily Kwok’s are not in our national consciousness. On a personal level I also related to Helen and the search for identity and belonging.

The show focuses on the women behind the Sweet MandarinRestaurant (an award winning restaurant based in Manchester). Why place a focus on these particular characters?

The book that the play was based on is about these women. However although it’s specific the story is universal and I was really aware of this while writing the play. I think that anyone who has come to this country in search of a better life would have similar dreams and aspirations to Lily Kwok. Quite a few people of different cultural backgrounds told me they connected with the play and it reminded them of their family and their struggle.

I hope they’ve been entertained and moved, laughed and cried. That they’ve either really related to the show and it’s reminded them of their families or that they’ve been thrown into a world they had no knowledge of before. I also hope their senses have been aroused because it’s a very visual and sensory show that plays with sound and smell with the cooking on stage.

Jennifer Tang directs the show, how have you both worked together to realise the show?

I met with Jen after I had written the second draft and I knew instinctively she was the right director for the play.

It’s a memory play, very sensory, it was obvious that the show needed visual style and beauty, a lot of sound design and movement. There’s also quite a challenging timeline. Jen was great as she asked a lot of practical questions and the audience will be relieved that she brought with her a lot of clarity so it is clear when characters are stepping forwards or backwards in time and when we’re in reality or memory world. By the beginning of the second week of rehearsals when we had worked through the script I knew that the show was safely in a brilliant pair of hands and that it was time for me to leave the room.

You’d become a writer after becoming frustrated with the acting roles you were being offered. Do you feel at present that theatre reflects our society?

It’s getting much better but there’s still a long way to go. Lily Kwok arrived in England in the 50’s and it’s only now in 2018 that her story is being told on stages around the country. One of the many things I’m proud about MOUNTAINS is that it puts two East Asian women front and centre in strong, complex and demanding leading roles.

Do what you can. Try to write a little every day. You can get a lot done in an hour. Turn off your inner critic especially for the first draft. See what comes, as much as possible you want to switch off your mind so your subconscious can peek through. I think that’s when writing’s exciting when the story takes over and leads you somewhere unexpected. A lot of the time you just need to get yourself out of the way and let your characters surprise you. Write something that really matters to you. If it isn’t personal make it personal.

Mountains: The Dreams of Lily Kwok will be showing  from Thursday 19th to Saturday 21st April 2018 at Stratford Circus. The show will also be touring the U.K. to find out more about the production, visit here…