There are approximately 22,500 Greeks living in Munich, more than in any other German city. Many of them arrived in the 1960s as so-called guest workers or to escape the military regime in Greece between 1967 and 1974. In recent years, the number of Greeks living in Germany has increased again, as a result of the economic crisis in Greece. Co-directors Anestis Azas and Prodromos Tsinikoris have collected stories of Greeks who have made Munich their home and present them in the framework of a documentary project at the Kammer 3, the studio space of the Kammerspiele. 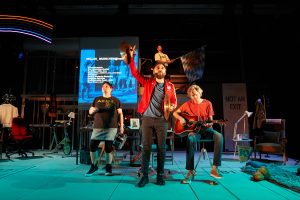 In the centre of the production are the true stories of three Greeks who have recently come to Munich: Architect Aikaterini Softsi, who ran a bar in Greece but gave up because her customers couldn’t afford to pay for drinks anymore; Angelos Georgiadis who was fired from a job in tourism that was meant to be for life and couldn’t afford the €15,000 for a visa to Canada; and the IT graduate Valantis Beinoglou. Framed by a radio program, the three protagonists tell their own stories, intertwined with songs, the weather forecast, and a selection of audio interviews with other Greeks living in Munich. One of the interviewees has become so cosmopolitan that he prefers to conduct the interview in English because he finds German too limiting. Another is going to retire to Greece after working in Germany for  most of his life but he appeals to young Greeks to embrace their new home and not repeat the mistake he made. The weather is an ongoing concern for Greeks as the temperature in Munich tends to be quite frosty compared to sunny Athens. But the radio program “Brüder in der Fremde” (Brothers in a Foreign Land), that was broadcast by the Bavarian Broadcasting Station for almost forty years, offered some comfort to homesick Greeks.

Unlike the generation of their parents and grandparents who “did not want to arrive”, members of the new generation do not spend their time feeling homesick, they try to make their lives in Germany to escape the eternal suffering in their native Greece where all that remains to deal with the desolate situation is screaming therapy, i.e. screaming into a pillow as soon as platitudes such as “there is a light at the end of the tunnel for the Greek economy” are expressed.

Although Aikaterini starts out as a dishwasher in an exploitative work relationship, she does not give up hope and eventually advances to the position of chef in a Bavarian restaurant, which is still a far cry from working as an architectbut better than trying to run a bar without customers.  Angelos and Valantis fare somewhat better in Munich with Angelos finding work in a travel agency and Valantis having an actual career in IT, the subject that he studied.

Hellas München is moderated by director Prodromes Tsinikoris, who adds his own story to the evening.  Unlike co-director Anestis Azas, Tsinikoris has spent many years in Greece, founding his own stage company in Athens in 2015. His parents have remained in Germany. Along with his own biography, Tsinikoris offers  information about the first Greeks in Germany and other historical tidbits. This is an entertaining and heart-warming production, appealing to Greek and German audiences alike. 4/5

Next performance on 24th April. For more info, click here…

This production is in German, English and Greek withGerman surtitles.