The Importance of Being Earnest @ The York Theatre Royal Review

Oscar Wilde’s sophisticated and rib tickling drama takes audiences on a skip through country houses, lavish lounges and troublesome aristocrats. The York Theatre Royal is the perfect setting for this historical masterpiece that has survived the test of time, and is truly a tribute to classical theatre as we know it today. 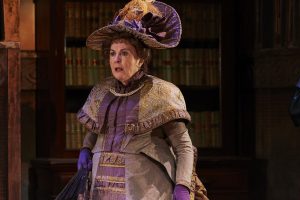 The plays starts at Algernon Moncrieff’s flat in Half Moon Street London, in which we are introduced to our two male protagonists, Moncrieff and his compatriot Jack Worthing, who bounce off each other’s amusing puns with real vigorous wit. Wit that is soon extinguished when the dreaded Aunt Agatha herself, Lady Bracknell, reduces Worthings dreams of wedding his love Miss Gwendolyn Fairfax to shatters, picking apart his squandering personality and criticising his worldly goods. Gwen Taylor plays Bracknell with a real snobbish flare and deserves noted respect for dragging a rather large garment across the space without once tripping, ripping or crashing the monstrous outfit into another performer whilst on the prowl. A good use of playful sarcasm by the whole cast sees the first scene catapult audiences straight into period style Britain, and amuses one to the trivial problems a wealthy upper class citizen may face, compared to that of present times.

The performance then continues on to Worthing’s country manor, both externally in the garden and internally within the library, showcasing once again the privileges one may expect in fashionable old style Britain. With plant filled hanging baskets, well prepared outdoor furnishings and a large swinging bench set for the next scene, one is immersed in summer, and the joys of the outdoors. Worthing of course is less enamoured by the beautiful country grounds as he finds Moncrieff, fooling others into thinking he is Worthing’s brother, laid back at his home eating muffins and expecting a free vacation. The name Earnest is positioned cleverly within this piece to spark notes of love from the females, and tales of dismay for the gentlemen trying to act as though the name is their own. It is only until the very end, when family secrets are revealed, that we get the full picture of what has occurred and worlds are well and truly reshaped.

The piece delivers drama, however I do find the incredibly traditionalist approach quite tiresome in parts, as the play has little differentiation from prior productions previously put on. It also lacks impact, in part due to the performance playing too much on the comedic value and not really exploring any other concepts the play has to offer. However, overall the piece has wit, top notch staging and costuming and a timeless elegance that just further demonstrates Wilde’s skilled writing ability.

If you fancy a touch a traditional flare, mixed with a wave of comedic turmoil, then this particular production is one to attend! 3/5

The Importance of Being Earnest is currently showing until Saturday 21st April 2018 at the York Theatre Royal. To find out more about the production, visit here…