Confronting action, bold design and a defiant aggressiveness. An English Touring Theatre, Theatr Clwyd and Nuffield Southampton Theatres co-production supported by The Royal Theatrical Support Trust, A Streetcar Named Desire is given a modern revival, but I wonder whether its initial upbeat tone invites the appropriate spectatorship. 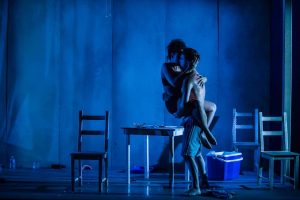 Faded glamour Blanche DuBois seeks refuge one summer, calling on her sister Stella to take her in. Deep South, Mississippi, the heat is not the only thing rising. With the burden of past secrets and tempered husband, Stanley, the two confined sisters suffer under the guise of love. Threatening to tear their life apart, the drama and fuelled fury is often unbearable to watch and Williams’ writing confronts the brutality of existence with visceral eagerness.

With a sense of chasing the demographic this production pulls out all the stops, but sacrifices the detail of the original script. The starkness of the writing which confronts themes of abuse, mental health and culture are not only historically groundbreaking, but still remain relevant today. However, caught up in a battle between design aesthetic and script, this production opts for tricks creating a novelty production where the writing feels like a second thought.

Stanley is a brute not a cheerleading mock of a West Side Story gang. Stella should be sweet juxtaposed by her unstable sister. In an attempt to make the play contemporary, the authority and command of Williams’ original masterpiece is lost.

However, for many this production to witness is cool and edgy. The design is flawless, it is visually stimulating and the climatic ending is truly moving. This reimagining is not stifled by the traditional nuances often applied to Williams’ writing, instead invites a new audience to observe the spectacle of American naturalism. Although clean and dynamic, this does not work for me and I leave the theatre only left with the distressing image of broken Blanche rather than the whole story. 2/5

« Previous post
Why is the Sky Blue? @ The Southwark Playhouse Review
Next post »
No Sex @ The Münchner Kammerspiele Review