No Sex @ The Münchner Kammerspiele Review

Toshiki Okada is one of the most important Asian directors. No Sex is his third work for the Kammerspiele, it premiered on 14th April 2018. A stage director and author, Okada founded the theatre group chelfitsch in 1997, which had their first international success with 5 Days in March, a play about two young people fleeing to a love hotel to have sex for five days. His latest play deals with a group of young men who think that sex no longer matters. 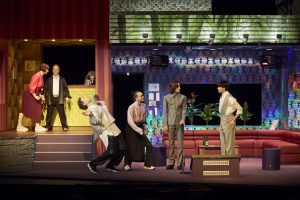 According to surveys by the Japan Family Planning Association, almost 50% of 18 to 24-year-olds in Japan have never had sex. They are still attracted to others but have learnt to live without sex because “emotional entanglements are too complicated”. Sex is just too much of an effort because it requires interaction, something that can be avoided in the virtual world.

Okada uses a Karaoke bar as a metaphor where people can experience love and emotions as simulated feelings, without any interaction. Four men in their mid-twenties enter the bar, a dimly lit room dominated by ornamental plants and colourful lights (stage design by Dominic Huber). They have never had sex before and wonder why love and sex are supposed to be so important. Singing love songs in a Karaoke bar might help them experience and understand these emotions. Representing the older generation, the bar owner and a cleaning lady find the sexless young men, who name themselves after ornamental plants, quite strange. Is their behaviour just an act of resistance against commercialism? After all sex and emotions are used to sell products.

Mr Matsumoto (Stefan Merki), the owner of the bar, serves as the narrator of the story. He states that he met the future, which came by bearing the names of ornamental plants: Anthurium (Christian Löber), Banyan (Thomas Hauser), Hedera Helix (Benjamin Radjaipour), and Monstera (Franz Rogowski). Mr Matsomoto and the cleaning lady Ms Nakamura (Annette Paulmann) watch the young men sing “I’m So Excited” by the Pointer Sisters and Madonna’s “Like a Virgin” trying to experience feelings they know nothing about: “There are people who do it, we don’t.” The young men explain that they belong to a different “cluster” from the older generation and are currently engaging in “intercluster” communication. Mr Matsomoto and Ms Nakamura try to make the youngsters understand what it is all about with Matsomoto giving a soulful rendition of Barry White’s hit “Can’t Get Enough of Your Love, Babe” and Ms Nakamura bringing up images of ceiling mirrors in the bedroom and bubble baths whilst singing Donna Summer’s “I Feel Love”. In the end there seems to be some kind of understanding bridging the two different clusters. Mr Matsomoto remarks that he does not find the young men and their attitudes strange any more, just “new”.

Movement is very important to Toshiki Okada’s productions. Gestures and moves are exaggerated and often in direct contrast to the lines a character is speaking. This might look very comical and prompts laughter from the audience on several occasions but it also betrays the true feelings of a character. Okada follows in Brecht’s footsteps and tries to see the audience as a critical observer.

However, in this case there is not enough substance to observe. The issues are not truly discussed and the production remains on the surface of the topic, there is not enough depth.  The cast are very good, especially Stefan Merki’s rousing rendition of Barry White’s soulful song. 3/5