The Bridge Theatre is converted into a Hampshire farmhouse garden for Laurie Sansom‘s staging of Nightfall, a new play by prodigious 31 year old playwright and author Barney Norris. Nightfall follows the declining fortunes of grief-striken widow Jenny (Claire Skinner), her son Ryan (Sion Daniel Young) and daughter Lou (Ophelia Lovibond) and a surrogate third child Pete (Ukweli Roach) who has recently been released from a year long stint in prison. Pete’s return, and his scheme with Ryan to illegally siphon oil from a pipeline that runs through the family land, promises to ease the families financial problems, but events take an unexpected turn. 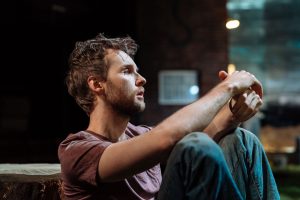 From the off, sound is an issue, the design is clunky and I overhear many around me complaining that the actors are quiet and muffled, it seems an acoustic issue to me, which is odd considering The Bridge’s self proclaimed technical mastery.

The production itself takes some time to gather momentum, the high energy opening falls somewhat flat. Young and Roach are dwarfed by the scale of The Bridge’s thrust stage, their action and dialogue are laboured, and I fear I am in for a slog. Once settled and relaxed, the two actors are able to find some light and shade in their characterisations, eventually earning my sympathies. My feelings towards the two men mirrored my experience of Nightfall as a whole, although grating and unengaging at first, it reveals itself to be surprisingly tender and affecting.

The female contingent offers more consistent performances; Skinner discovers much in the well drawn character of Jenny, the struggling matriarch who, after the premature death of her husband, finds solace in nostalgia, white wine and Fleetwood Mac. Skinner gives a rounded and truthful picture of the absurdity and pettiness of grief, reaching particular depths during Jenny’s many moments of personal weakness.

Lovibond is the stand out however, as conflicted boomarang daughter Lou, torn between a disintergrating family, shrinking career prospects and a fading sense of her own aspirations. Lovibond shows substantial stage presence, good timing and an impressive intensity during her most anguished moments. The role of Lou is burdened with many of the plays more didactic lines, telegraphing many of its state of the generation themes, but Lovibond never fails to convince in her delivery.

The final act threatens to expose the well constructed Ibsen-esque character subtexts but holds back, allowing the tension to simmer further. The climax of Nightfall showcases Norris’s substantial skill as a dramatist. By employing an array of familiar tragic devices he subverts expectations, the play ends up diverting from its dramatic red herrings into surprisingly gentle, less scathing territory, and a bittersweet sense of the genuine minutiae of modern life.

Unfortunatly the play doesn’t quite manage to reconcile the events on stage with Norris’s social commentary.  The connection to the supposed wider context, on which Norris elaborates with eloquence in his programme notes, too often feels tenuous. Nightfall achieves a more even balance when dealing with its immediate narrative action, which ultimately comes to the fore as the political gives way to the personal. Perhaps thats the point, that inevitably our everyday struggles will obscure lifes bigger picture.

Once it warms up Nightfall offers an engaging story of grief, love, family and heartbreak, but its explorarion of the forces that stunt millenial life doesn’t satisfy completly. However it is a worthy and admirable piece, if only for serving to highlight the generational divide between the subjects of this play and the people most likely to see it. 3/5

Nightfall is currently showing until Saturday 26th May 2028 at the Bridge Theatre. To find out more about the production, visit here…