There’s a definite magic beaming from the Dorfman Theatre. The space has played host to a variety of wonderful productions in recent months, which have put many underexplored stories onto the big stage, and Natasha Gordon’s debut play continues this trend. Following the death of Gloria, the family prepare for the usual nine-night wake. Consecutive evenings of food, family visits, music and mourning take place, and as each day passes, the family’s personal endurance is tested to the limit. 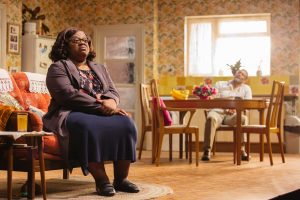 Roy Alexander Weise’s production celebrates Caribbean culture, putting a popular Jamaican tradition at the forefront of the narrative. This event is certainly elaborate, but it’s also incredibly important, and invites members of the wider family to pay their respects to the deceased. It’s a chance for them to bid farewell to their spirit, and allow it to pass over to the other side.

As Aunt Maggie, Cecilia Noble provides a comedy masterclass in front of our very eyes. Her delivery is filled with many delights; roars of laughter echo around the auditorium as Noble cracks jokes, huffs around the stage and portrays a figure that all of us have encountered at least once. It’s a performance that’s as close to perfect as is humanly possible and there’s no surprise that some of the best moments come from her.

But that is not to diminish the rest of the cast, who are equally spectacular and provide different offerings to make the piece so well rounded. We watch the piece unfold and are confronted with moments of heartbreak, regret, anger, resentment, prejudice, bias and lots more. Weise has a natural talent to draw out performances that are straight to the point, multi-layered, rooted in depth and highly watchable. It’s an impressive collaboration from all.

Nine Night is definitely one of those shows you feel grateful for being able to see. Contained within it is so much to enjoy, with just the right amount of light and shade. In a theatrical climate where it feels like the same stories are being recycled over and over again, this production manages to say something totally unique. Gordon’s writing is a necessary voice to theatre today and I simply cannot wait for her next play. 5/5

Nine Night is currently showing until Saturday 26th May 2018 at the National Theatre. To find out more about the production, visit here…