Windrush: Movement of the people @ The Northern Stage Theatre Review

A deeply- sociological tale celebrating the 70th anniversary of the Windrush arrival, retold by the awe-inspiring movements of its performers. 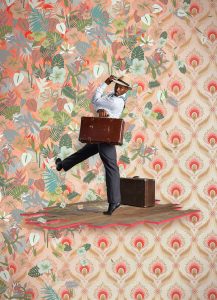 This highly expressive mixed programme played by Phoenix Dance Theatre incorporate the two dance pieces ‘Calyx’ by Sandrine Monin and ‘Shadows’ by Christopher Bruce before setting the scene for the main performance – Windrush: Movement of the People. The three pieces, entirely based on the single narrative of the dance, vividly incarnate the ideologies, hopes, and burdens of a nation in transition.  A performance where the body is a gracious element of expression, and a canvas, painted under the sounds of the Caribbean, Calypso music and songs by Christella Litras, Billy Cobham, Seal and others  .

The last piece, choreographed and shaped through Sharon Watson’s Windrush experience, artistic director of Phoenix Dance Theatre, is brighter, more cheerful and carefree as it starts under the tangerine sky with summertime clothes, so it can later undergo the hardships of belonging and rejection of those who become faceless, as they ‘came’ after being ‘called’… These words of the soundtrack emphasise the genuine purpose of Caribbean’s migration – not simply a quest for a change or a job, it was a call of duty they answered after being asked to come and help. This part is more vibrant and focuses on the simple joys of community, followed by the overwhelming emotionalism tightly bound to the feels of their distant journey.  The décor is rather simplistic, but moving, with all the suitcases and piles of luggage accentuating the heaviness of a movement and a nation looking for comfort in the sea of uncertainty. And how difficult it feels to be the different, the unknown, especially when associated with the stigma of race and foreignness.

As the thousands of stories of migration, this one cannot possibly be recounted solely with words. The narrative of people’s hopes, dreams and the homes they left to be faceless for almost an eternity, these stories as one can’t be retold, they can only be experienced through the poetry of people’s flesh, their dance and their sparkling eyes.

Windrush: Movement of the People was shown from Wednesday 9th to Thursday 10th May 2018 at the Northern Stage Theatre. To find out more about the production, visit here…