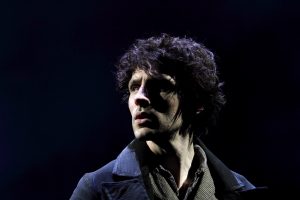 Owen is accompanied by two Royal Engineers whom he is assisting as translator as they create a new ordnance survey map of Ireland, in English. One of them, Leutenant Yolland (Adetomiwa Edun) becomes enraptured by the landscape and the culture, falling in love with local woman Maire (Judith Roddy) despite their inability to understand each others language.

The action is contained to the hedge school floor, which is surrounded by an ethereal rural landscape of dirt and fog. Rae Smith‘s design acheives scale without sacrificing intamacy and the skillful cast perform with precision and clarity to ensure that subtleties of character are not lost in the space.

Friel’s text takes centre stage and Rickson’s direction is patient and unobtrusive, providing a sense of fluidity to the action and allowing the cast to savour the musicality of the play’s language, while atmospheric detail is provided by live music and a well judged sound design.

Strong performances abound, Hinds exudes a rough warmth as Hugh, while Morgan effectively depicts a conflicted young man caught between two sides, forced to come to terms with the reprecussions of his choices. Dermot Crowley offers a clear eyed, unsentimental depiction of the lonely, increasingly senile Jimmy Jack Cassie, Edun’s Yolland is the embodiment of youthful idealism and Roddy gives a powerhouse performance as the yearning, unfulfilled Maire.

The play is dotted with awe-inspiring moments, a particular highlight being when Yolland and Lancey (Rufus Wright) outline their plans to anglicise place names via their interpreter Owen, the gradual deflation of Wright’s colonial arrogance is extremely funny and fantastically well observed.

Likewise another notable use of Friel’s ironic device of having both Irish and English characters speak in English, while not understanding other, the famous love scene between Yolland and Maire, is performed with a scintillating energy that is completely absorbing.

The production favours simplicity and is a traditional staging in many senses, however the grace and attention by which the play is executed endow it with a surprising vitality. The accumalative effect of it’s choices is a gripping and steadily increasing emotional power that allows for a wholly satisfying expoerience. 4/5

Translations is currently showing until Saturday 11th August 2018 at the National Theatre. To find out more about the production, visit here…