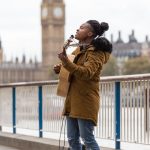 Curated by musician and theatre maker Kim ‘Busty Beatz’ Bowers and dance/theatre company co – founder and choreographer Lisa Fa’alafi, Hive City Legacy will boldly take over North London’s Roundhouse with a line up of 9 talented acts of colour. A female led line up, the evening’s aim is to create a ‘fierce and political homeage to London’. Acts range from circus artists to beatboxers, spoken word artists to cabaret performers – showing off the capital’s diverse talent. One of this year’s chosen acts, singer/songwriter Sherika Sherard has sang with the legendary Seal and also been acknowledged by iconic filmmaker Spike Lee. Sherika tells us more about her music career and what to expect from the evening.

Hi Sherika! You’ll be starring in Hive City Legacy at the Roundhouse in July. How are you feeling ahead of the show?

The whole experience has been so uplifting, the bond between all of us is unreal and I can’t wait for us to showcase it on stage.

Developed by Busty Beatz and Lisa Fa’alafi, the line up of 9 was finalised from a total of 250 applicants, what can audiences expect from your performance?

They’ll definitely forget they are sitting in the Roundhouse…. just expect the unexpected I’d say.

The evening’s aim is make a ‘brand new fierce and political homage to London’. What would you like for audiences to take away from the show?

Just to think more, the next day when they go about their everyday lives I’m hoping they’ll have a few light bulb moments… I’d like for them to feel enlightened.

You cite Marvin Gaye, Paolo Nutini and Nina Simone as your inspirations. What is it about these singer/songwriters that inspired you to pursue a career in music?

Their honesty, it’s not easy putting deep emotions that you’re still yet to understand into a song however it’s the pure emotion that makes the song so great because “We’re all sensitive people with so much to give”.

You’ve experienced a varied music career, having been a busker, performed at some of London’s renowned musical venues including Ronnie Scott’s and the Jazz Café as well as performing internationally. How have these experiences shaped you as an artist?

Well for me its just shown me that there is no right way of doing things, except the way that’s right for you of course. Everything I’ve achieved so far is through reaching out to people, people approaching me or even me sometimes having to pretend to be my fake manager “Simon” through email. This has shown me that there is always a way, no matter how long it takes, just be patient, work hard and try to enjoy the journey, that’s what Simon tells me anyway.

You’ve also received recognition for your work from Seal, who invited you to perform at two of his shows and the legendary Spike Lee, who utilised one of your tracks on his Netflix series She’s Gotta Have It. How does it feel to be acknowledged by fellow members of the performance industry?

It feels great because it shows that the people who can help are looking further out for new artists rather than the ones that are forced fed to them.

What advice would you give to aspiring singer/songwriters?

Even if the songs rubbish just finish it and then move on, you never know what you’ll take from it later on.

Sherika Sherard will be performing in Hive City Legacy from Tuesday 10th until Saturday 21st July 2018 at the roundhouse. For more information on the production, visit here…