Another daring and blood thirsty production put on at the Shakespeare’s Rose Theatre, as Richard III takes on a contemporary twist which will have you on the edge of your seats in anticipation. With the Duke of Gloucester killing everyone in sight, there is rarely a dull moment within the play with armies declaring war, devious plots beginning to unfurl and the sweet taste of revenge becoming ever so tempting. 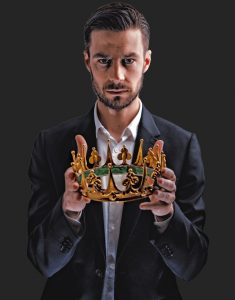 The cast, with their modern edge, incorporate present day military attire and props to make the play that more accessible to the viewing audience, and in turn opening up the performance to current issues around the world today.

Richard III, played by Dyfan Dwyfor, is delivered with devilish fire and minion like energy; especially during the second half, when all plans once controlled within his iron fist, are seen slipping through his fingers like sand. With his body half deformed, Richard takes on the image of Quasimodo; hunched over and shuffling his body across the stage, which Dwyfor does with real believability.

The play’s plot obviously centres greatly around the unpopular King, however other notable characters include that of the Queen, played by Emily Raymond. A once strong and powerful feminine figure turns into a grieving mother mourning the deaths of her children and reflects on her loss of authority in this new age of war and destruction. Raymond has a hard outer shell, but plays the softer sides of the Queen’s character with honesty and compassion, allowing audiences to unlock the true horrors of what carnage Richard has unleashed upon a once calm kingdom.

Staging-wise, the incorporation of the trap doors to fling the dead corpses in is well conducted, and gives the impression that the hole on stage leads deep into the after life. This also adds impact when Richard is executed (finally at the end of the piece) and thrown down to all the individuals he has slain during his time in power, pulling him to the hell he has inflicted upon others.

The moody lighting and even song and dance numbers in parts are a quirky addition, and gives audiences a different take on an old classic, although perhaps is a touch too musical theatre for some people’s liking. Finally, the way in which the cast use the audience as period style spectators is refreshing, and makes one feel involved in the dreaded storyline, as well as the ruling vote for who should succeed in the coming battle.

Overall, a clean cut and engaging evening of high drama, family feuds and murderous meltdowns. Shakespeare’s Rose Theatre is truly putting on some stunning productions and as a result, Shakespeare is still having an everlasting impact on the theatre world today. Long may these style of pop theatres continue, if theatre be the food of love then we should well and truly play on! 3.5/5

Richard III is currently showing until Saturday 1st September 2018 at Shakespeare’s Rose Theatre. To find out more about the production, visit here…

« Previous post
Choreographer Duwane Taylor talks about working on East Wall – To show at the Tower of London (LIFT 2018)
Next post »
Jedem Das Seine. Ein Manifest (To Each Their Own. A Manifesto) @ Münchner Kammerspiele Review