Jedem Das Seine. Ein Manifest (To Each Their Own. A Manifesto) @ Münchner Kammerspiele Review

Polish singer, actor and director Marta Górnicka began developing her concept of a new modern and tragic choir theatre at the Zbigniew Raszewski Theatre Institute in Warsaw. In 2010, Górnicka  founded her “Choir of Women”and her first production This is the Chorus Speaking, which added a political dimension to her work, premiered in Warsaw the same year, followed by the award winning production Magnificat, which toured internationally. 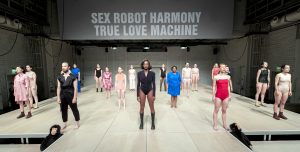 For her first work at the Münchner Kammerspiele, Marta Górnicka formed a choir composed of ten actors of the Kammerspiele ensemble and fifteen Munich residents. Her libretto entails excerpts from feminist manifestos such as Valentine de Saint-Point’s Manifesto of the Futurist Woman, Valerie Solana’s SCUM Manifesto, #Me Too Manifesto, quotes from current political events, advertising blurbs and new texts by Swiss playwright Katja Brunner.

The title of the production led to some controversy before the premiere as “Jedem das Seine” is a phrase that was displayed by the Nazis above the entrance to the Buchenwald concentration camp. Originally used in jurisprudence and based on the concept of justice, the Nazis twisted the phrase around to the cynical interpretation “to each their own punishment” to dehumanise people. Marta Górnicka chose this phrase as the title of her production to warn against fascist mechanisms which still exist or are gaining strength in our society.

Górnicka’s text collage Jedem das Seine presents a rather bleak picture of society. Focusing on the existing inequality between the sexes, Górnicka believes that none of the feminist manifestos have led to significant changes. Instead, everything that is not part of the patriarchal world order is excluded and declared as “foreign”. Using the choir as the voice of society, Górnicka examines forms of social expression.

Dressed in trousers, dresses, and leotards, barefoot or in boots (costumes by Sophia May), the female and male performers march back and forth, singing, screaming, speaking and whispering the text as an outcry against inequality and sexism, conducted by Marta Górnicka from the auditorium. At times the text is spoken at high speed, at other times certain phrases or words are repeated over and over again. Changing between rebellion and submission, the choir occasionally flock together aggressively to spew out fascist phrases and propaganda.

A sex robot is advertised as a True Love Machine, performers take on pin-up poses and caress their thighs and hips whilst inviting interested parties to use them as they please, satisfying their pornographic fantasies. Górnicka clearly shows the dehumanisation and objectification of women in our voyeuristic society where “everybody wants to see everything of everybody”.

Played by a topless Anne Ratte-Polle in a yellow wig, Trump makes an appearance as a clownish symbol of the current world order, presenting himself as the driving force behind right-wing parties and reactionary thinking whilst his followers are fawning at him in adoration. A hand puppet of a chimpanzee, voiced by Gro Swantje Kohlhof, compares sexual violence against women in modern day capitalism with Hitler’s fascism, symbolised by the concentration camp in Dachau, “one of the most productive camp bordellos in Europe”. With Bach’s cantata “Nur jedem das Seine …”, (Only to Each His Own), the choir presents itself as a social counter-model, standing for potential diversity and coexistence among all kinds of people.

An intriguing production – relevant and disturbing. 4/5

The is in German without surtitles.