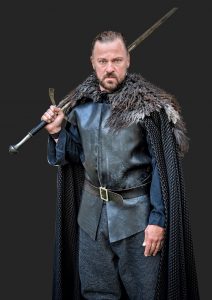 Macbeth, played by Richard Standing, struggles with the inner turmoil of guilt and fear, after his actions see the death of King Duncan and his ultimate rise to the Scottish thrown. Of course, Macbeth is supported by his temptress of a wife, lady Macbeth (Leandra Ashton) whose possessive nature and snake like whispers drive the once innocent warrior to become nothing more than a common fiend and murderer. Credit also falls to the mystical powers of the witches and their taunting of Macbeth, driving him closer to lunacy and a creeping psychotic. The cast handle this spicy storyline with real drama and conviction, matched by soaring staircases, grand costumes and a formidable wooden gateway in which to hide the more bloodier and alarming scenes from spectator’s view. The large trap door in the middle of the set also provides a dazzling cauldron pot for the witches, brewing up their victims and plotting their dastardly schemes, whilst chanting in high pitched screeches.

This somewhat ancient play is brought to life within York, and the cast handle the intense fight scenes and dagger like betrayals with high drama and a Shakespearean flare. The detailing is specific, as well as extremely refreshing, seeing the piece in a traditionally designed theatre with a loaded market stall outside with a buzzing audience atmosphere. Plus, not even a breath away from the famed Clifford’s towers, which gives one a taster into the lifestyle of medieval England and sets up the play nicely.

Overall, a fashionable, classy and educational affair, providing one (whether a Shakespearean buff or novice) the chance to appreciate the work without having to analyse every last morsel. Pop on down to the pop up theatre, before the final curtain call, to catch a truly one off cultural event. 3.5/5

Macbeth is currently showing until Friday 17th August 2018 at Shakespeare’s Rose Theatre. For more information on the production, visit here…

« Previous post
Jedem Das Seine. Ein Manifest (To Each Their Own. A Manifesto) @ Münchner Kammerspiele Review
Next post »
The Jungle @ The Playhouse Theatre Review