The Jungle @ The Playhouse Theatre Review

Risking life and death for the opportunity of a new life in Kent might not seem all too appealing to many. But for the thousands of refugees escaping war torn countries it is a journey that they can only hope to achieve.  The Jungle, newly transferred to the Playhouse Theatre from the Young Vic maps out the complexities of the European migrant crisis that led to upwards of 8,000 people  living in squalor on a former landfill site. 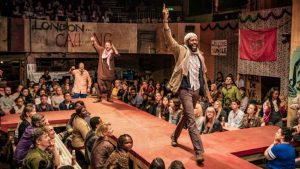 Joe Murphy and Joe Robertson have unarguably written a colossal beast of a play, with Stephen Daldry and Justin Martin’s direction playing an equally magnificent force. The stalls of the Playhouse Theatre have been gutted, replaced with a mock-up of the real makeshift cafe that became a fundamental community hub for the Calais Jungle inhabitants.

Miriam Buether’s set design is resourceful, practical and allows the piece to easily mould around it. Traditional frescos are covered with boards displaying graffiti and posters. An Arsenal flag draping over a decorated frieze heightens the sense that as a mostly middle class theatre audiences we should focus on what is happening to the migrants who are desperate for a new life.

Sat at benches in this shanty Afghan cafe, the audience receive spiced coffees, eviction flyers and perfectly delicious roti from the inhabitants while the action torpedoes around us. It’s this type of chaos that gives just a glimmer of what life was like for the people living on the total fringes of society.

Our narrator Safi (Ammar Haj Ahmad) describes how the Jungle came to be and acts as the bedrock of the piece. Though the main drama focuses on cafe owner Salar, beautifully played by Ben Turner, the troublesome 15 year old Norullah (Mohammad Amiri) the comedian come agitator whose racists retorts cause bitter conflicts with 17 year old Sudanese rival Okot (John Pfumojena).

Murphy and Robinson’s writing comes from direct experience living and working in the camp. The two set up a theatre appropriately named Good Chance, but the ‘white saviour’ irony isn’t lost on the boys. The Jungle’s tension begins to unfolds as a hoard of British do gooders descend onto the camp after seeing the horrific photo of three year old Alan Kurdi’s body washed up on a Turkish beach.

Alex Lawther bounds on to the stage as the eager wannabe saviour Sam and proclaims that the camp ‘is just like Glastonbury but without the toilets.’ His Etonian never-done-a-days-work-in-his-life backstory is a smidgen too trite but nonetheless has an appropriate humour that much of the other middle-class liberators provide.

This isn’t so much of a play about survival, as the characters rarely survive, they more endure never-ending trauma. This is “theatre for change” on a West End budget, rather than being isolated to the radical fringes, it’s being produced at the forefront of mainstream theatre.

There is a warmth though that through great struggle a community can grow, as the late AA Gill writes in his Sunday Times column of the real Calais Jungle cafe ‘if I ever find myself lost and penniless, I hope it’s the liberals with leaky valves and a penchant for quoting Shakespeare that find me, and not the sanguine, pity-tight realists’. When it comes to children dying in order to have the opportunity of a a better life we cannot afford to be stiff with the hand we offer out to them. 5/5

The Jungle is currently showing until Saturday 3rd November 2018 at the Playhouse Theatre. To find out more about the production, visit here…