Sting’s personable journey to stardom, and early years as a kid growing up during major industrial upheaval within his childhood community, are explored in this charming, yet hard hitting, piece of musical theatre. The Last Ship tells a story of financial instability, social turmoil and the question of local identity throughout ever growing change. The musical repertoire blends deep rooted  traditional chanting with a Mumford and Sons folk friendly flavour, with impactful lyrics that set one on a patriotic singalong. 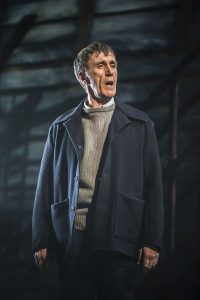 Jackie White, played by the highly experienced showman Joe McGann, is a key protagonist in this rally against workers rights, and the cement that keeps his entire community bricked together in unity. Proud and highly respected, Jackie is supported by his devoted wife Peggy (Emmerdale icon, Charlie Hardwick) a lady with equal passion and a fight for justice. The couple’s tight bond is not however shared by younger lovers, Meg Dawson (Frances McNamee) and Gideon Fletcher(Richard Fleeshman), both highlighting that time very rarely soothes old wounds. Especially, when after so long apart, a child is thrown into the mix, and even worse than that a child unknown to her father, and curious of his disappearance many years ago.

The performance also launches you into the tense world of the shipping crisis, especially prominent in places in and around the North East, to scrap the booming industry of ship building, and the jobs that go with it, replacing it with cheap labour that would agree to take the already manufactured ships apart. Community spirit is challenged and has a piece of its livelihood erased in a matter of days, demonstrating key differences between the ‘haves’in Westminster, and the ‘have nots’ in this particular local neighbourhood. In a way the piece has the rebellious storyline of the miners strike in hit musical Billy Elliott, merged with the staging and slight comedic value of Gilbert and Sullivan’s HMS Pinafore.

Overall, a vibrant, bold and punchy piece of musical theatre that demonstrates that even modern time musicals can still have the potential to rival the old favourites. Plus, if nothing else, the upbeat Geordie voices will have you grinning from beginning to end, as will the catchy song lyrics and slick choreography to boot.

Catch the performance soon before ‘the last ship sails!’ 4/5

The Last Ship was shown from Monday 25th until Saturday 30th June 2018 at the York Theatre Royal and is currently on tour. To find out more about the production, visit here…

« Previous post
The Jungle @ The Playhouse Theatre Review
Next post »
Dancer and Videographer Shakaiah Perez talks about taking part in Hive City Legacy at the Roundhouse!