Dancer and Videographer Shakaiah Perez talks about taking part in Hive City Legacy at the Roundhouse! 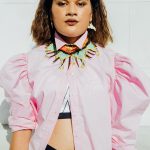 Curated by musician and theatre maker Kim ‘Busty Beatz’ Bowers and dance/theatre company co – founder and choreographer Lisa Fa’alafi, Hive City Legacy will boldly take over North London’s Roundhouse with a line up of 9 talented acts of colour. A female led line up, the evening’s aim is to create a ‘fierce and political homeage to London’. Acts range from circus artists to beatboxers, spoken word artists to cabaret performers – showing off the capital’s diverse talent. One of this year’s chosen acts; dancer, choreographer, photographer, videographer, and writer Shakaiah Perez tells us more about her varied career and what to expect from the evening.

Developed by Busty Beatz and Lisa Fa’alafi, the line up of 9 was finalised from a total of 250 applicants, what can audiences expect from your performance?

For me personally, the show talks about our individual stories and how we are all so similar but very different at the same time. It sheds light on the trials and tribulations we face as femmes of colour walking through this world not only as femmes/ women but also as people of colour. The show is a celebration of all our differences and the magic that exists not only within ourselves, but also the communities that we belong to. The show is designed to empower people, to decolonise the mind through art and to share our experiences.

The evening’s aim is make a ‘brand new fierce and political homage to London’. What would you like for audiences to take away from the show?

I would like people to leave the show feeling as though they can pursue anything they desire and to feel empowered to embrace their truth. Not only to walk in their truth, but to live their best life regardless of the societal norms that are placed on us. I would like others to realise the diversity of being a person of colour and for women and young girls to leave the show with the idea of matriarchy embedded in to their mind.

Originally from New Zealand, your Afro Polynesian heritage serves as one of your main inspirations when creating new works. How do you approach creating projects?

When it comes to my work as an artist, my main objective is to ensure that I am telling a story in all it’s rawness and for it to be authentic and unapologetic regardless of other’s personal opinions. In some works it is impossible for someone to not be offended by what you are creating and it is important for artists to continue doing the work that ignites their fire and makes them happy when they are going to bed at night. Cultural identity is important for a lot of indigenous people and being raised in indigenous schooling has been a major influence on my work ethic, style and the messages I portray through my work.

Being multi racial was difficult as a child as I was constantly questioned about my ethnicity and told that I would never truly belong. I found home and a sense of belonging in art and found it to be a place where I could completely loose my self and love myself for all that I am.

From a young age, you’ve represented New Zealand in various hip hop dance competitions, and you’ve also choreographed and danced for New Zealand band, Weird Together. Who or what inspired you to pursue dance?

As a young child I grew up doing ‘Siva Samoa’ which is a traditional Samoan dance. My dad would play the guitar and my entire family would sing songs that payed homage to our ancestors and our culture. I moved on to other cultural movements but lost myself in Hip Hop dance and that is where it all began. Since I was 8 years old I always wanted to back up dance for Beyoncé and Missy Elliott and to this day that is something I would like to tick off my bucket list.

For me my main inspiration for dance was music, the culture it belonged to and the way it made me feel. As soon as the beat drops I instantly need to move and for me, dance is my healer and my medicine.

As well as being a dancer and choreographer, you’re also a photographer, videographer and writer, having worked on projects with various institutions including the British Library to create projects focusing on Polynesian history. What inspired you to take on these disciplines?

When I was living in New Zealand I found that there were not enough mainstream media platforms talking about the success of indigenous communities and it annoyed (me) because on one end we were plastered all over the media when something bad has happened and tainted with the same brush as people of colour but when it came to our successes we were now all of a sudden not indigenous and normal citizens of New Zealand.

So in order to change this I began my own social media platform Travelling Feather which tells the stories of indigenous artists that I meet across the world through photography, videography and writing, but also my experiences not only as a traveler but also as an artist. I have always loved creating dance videos when I was younger and being that I am so particular about the way I would like things done I found myself filming. The photographic element also began when I was younger as fashion is something that I absolutely love, and since they go hand in hand I ended up taking on photography as another way of communicating my ideas and thoughts. Writing has always been something I have naturally used as another way of making statements to the world and creating an image in one’s mind to understand me not only as a multi dimensional artist, but also as a person.

As a creative who works behind the scenes as well as on stage, do you find that one is more challenging than the other?

I feel that when I am on stage I am unstoppable and that I can be whoever and whatever I want to be without having to worry about what others think. What people don’t get to see is all the hard work that goes on behind the scenes and although it is challenging at times it is worth it when you see the final product, especially if you are watching others shine on stage and succeeding.

What advice would you give to aspiring creatives looking to explore both onstage and offstage opportunities within the industry?

I would say that art is something that can be either and finding where you fit is most important. Working with the people you want to work with or connect with is important as you are on the same page and working towards the same end goal. Whether you are on stage or off stage as long as it makes you happy do it and if you want to do both you can. Just because you are known as a dancer does not mean you can’t be a fashion designer, singer and painter as well. You can be the whole package in one so own it.

Shakaiah Perez will be performing in Hive City Legacy from Tuesday 10th until Saturday 21st July 2018 at the roundhouse. For more information on the production, visit here…

« Previous post
The Last Ship @ The York Theatre Royal Review
Next post »
Actress Tuppence Middleton talks about starring as Jo in Vicky Jones’ The One at the Soho Theatre!