Eugene Ionesco, arguably one of Theatre of the Absurd’s greats, is receiving his first National Theatre staging in Exit the King, adapted and directed by Patrick Marber. 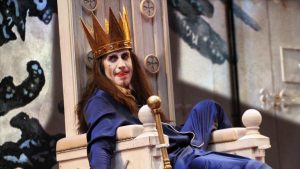 Dying is a part of everyday life, yet it’s rare that we ever plan for it to happen. King Berenger has been alive for 483 years, so his demise is certainly inevitable. Yet Rhys Ifans’ egotistic monarch denies death, consequently becoming angry and depressed over his predetermined fate.

As Berenger contemplates dying, his kingdom begins to slowly crumble from around him. Cracks begin to show in Anthony Ward’s set, and his slowly disintegrating design acts as a metaphor for the steady decline in order and logic. Chaos ensues and the tragicomedic themes are allowed to play out. It’s totally bonkers and for the most part, lots of fun to watch unfold.

The king seeks advice from his numerous wives, who each react to the news differently. Indira Varma’s Marguerite taunts, telling him he will die, whilst Amy Morgan’s Marie says just about anything to keep him happy. Both play the women with an acute characterisation; Varma’s blunt delivery of lines is a brilliant contrast to Morgan’s ditzy state of being all over the place.

Ifans demonstrates a masterclass in acting, portraying a person that’s totally obnoxious, whilst at the same time spiralling out of control. Physically grotesque, yet totally composed, he plays the king with a multi-layered presence that’s superb. Through more miraculous design from Ward, Ifans deteriorates in front of our very eyes, literally becoming extinct.

Ionesco wrote this play when he himself was dying, penning it as a self-help book of sorts that would assist in preparing people for the eventual end of life. His narrative may go on a little too long, and Marber could have done with an extra pair of eyes dramaturging it, however what’s been produced on the Olivier stage is certainly an achievement.

This is in no way absurdist theatre at its best, but it’s a mighty good effort. 3/5

Exit the King is currently showing at the National Theatre until Saturday 6th October 2018. To find out more about the production, visit here…