London thrives with a multitude of stories, its ability to draw individuals from all over the world makes it one of the world’s most exciting cities. Cultures collide as the city hustles and bustles – Cecilia Gragnani‘s one woman show, Diary of an Expat humorously delves into her own experiences of migrating from Italy to the UK. 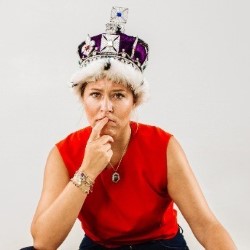 Part conversation, part performance, Gragnani’s anecdotal show humanises an experience we are so often presented with negatively and generically via the media. Gragnani cleverly has all thinking about what it means to be British – this notion most evident as she turns quizmaster – asking the audience a series of questions expected to be answered by those seeking British citizenship. Although lighthearted, this gameshow element bears the weight of those seeking brighter prospects within the UK, having to prove that they deserve to become residents by gaining knowledge of a land new to them. This weight is contrasted by UK residents who would struggle to answer half of the questions, if not all if they were confronted with the same test. Gragnani’s use of satire depicts the complexity of migration, this being an aspect of the show that should be explored further.

Diary of an Expat depicts a story of survival, taking on job roles perhaps not on top of the dream job list, however a necessity to getting by. The show also explores picking up British customs – having to learn about a culture and its nuances in a fraction of the time its residents would have to take in certain conventions, this again an aspect I’d like to see explored further. An experience comically depicted by Gragnani, I can imagine to be an incredibly overwhelming and confusing one to go through, Gragnani asking a member of the audience to assist her with her pronunciation another satirical look at what it means to be British, as there are a multitude of regional accents that all make up the British landscape.

Towards the show’s conclusion, Diary of an Expat zones in on a life after the results of the UK referendum vote. A nation that could happily be called home, now a hostile environment opting to leave the EU. Gragnani’s change in tone highlights a fear of the unknown, a vote mainly swayed by the topic of immigration, the show leaves the audience questioning how the vote will truly impact the nation, and what the conversations around immigration will look like. For a topic so heavily misrepresented, Gragnani offers one of many voices behind the news headlines. 3/5

Diary of an Expat is currently showing until Sunday 26th August 2018 at the Underbelly Cowgate as part of this year’s Edinburgh Fringe Festival. For more information on the production, visit here…