The mythical Phoenix, rising from the ashes is emblematic in everyday culture of something that is destroyed and then reborn. It was after a massive fire engulfed and reduced Battersea Art Centre’s historic Grand Hall in 2015 that a Phoenix rose in the form of a hashtag, #bacphoenix, which inspired thousands on Twitter in an outpouring of generosity and support. 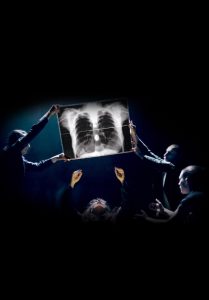 Despite such destruction wrought, deep in the ashes the embers of regeneration were burning, and in one of the greatest shows of British resolve in recent times, BAC kept calm, carried on, and rebuilt the Grand Hall. Also lost in the fire was Gecko Theatre’s set and equipment for their show Missing, only days into its run and ahead of a tour to Mexico. likewise the show is back and returns to reopen the space as part of BAC’s Phoenix season.

Missing follows the warped psyche of Lily, an unhappily married woman who delves into her forgotten past to discover her true self. It is one of the more experimental and disorientating dance shows at the moment, where hazy memories are depicted in giant picture frames, where no character speaks the same language to each other, and scenes are disrupted by flashes of light and distorted static, causing limbs to jerk and judder like there’s a rip in the space-time continuum, or a 1990s vhs tape on pause. Other times the characters move like a DVD stuck on fast forward, the choreography so tight that you wonder if it’s special effects pulling them about.

The result is something that is beautiful, whilst simultaneously unsettling and discordant. It’s story is equally arresting, being primarily about family, relationships and how they affect us. If there’s one criticism it’s that this is a story you have to stick with, as all the flitting between past and present, flashes and disparate languages can prove slightly distracting, but rewarding when you keep faith. It is both fitting and important that Missing opens both the Phoenix Season and the newly rebuilt Grand Hall, to recapture what was lost three years ago, to give a sense of what could’ve been, literally, what we’ve all been “missing”.

Missing is currently showing until Saturday 15th September 2018 at the Battersea Arts Centre. For more information on the production, visit here…