The Habit of Art @ The York Theatre Royal Review

Alan Bennett’s amusing yet hard hitting play of love and loss takes audiences into the rehearsal room of a piece which explores the joys and tribulations of art as we know it. Educational in parts, Bennett is clearly trying to send a clear and concentrated message to the audience, one which he does with upbeat charm and subtle intent. 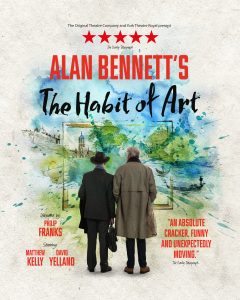 As you enter the space, you are greeted with hap hazard furniture, scattered props and swarming set pieces that all create the hustle and bustle of a play in the making. A workshop in style, as the characters begin to flood the stage, one feels transported to the inner workings of the theatre, and witness first hand how a play is created from scratch. You get the actor wanting a standing ovation every couple of minutes, the director wishing he could curl up in a ball and die and even the useful stage hands, who take on any role handed to them. Amusing and witty in spirit the performers keep audiences chuckling away, whilst still delivering on controversy and straight talking issues, simmering underneath the pleasantries.

Matthew Kelly, former Stars in Their Eyes presenter, gives a credible performance as Fitz/W H Auden, with his unfashionable brown cardigan and snobbery like exterior, although somewhat admired in the theatrical profession (alongside his work on Tesco ads). Kelly impresses the audience with his ability to go in and out of character, whilst already having his actor based character to contend with also, a skill many actors would find cumbersome and a possible slip up.

The only real flaw throughout the performance is in act 2, when the piece takes a real dip in energy and the text just feels draggy and too complex for any sort of real substance to be found. A pity as act 1 is a lot more purposeful overall.

All in all, another well written piece from one of this country’s most  famed playwrights, which is sure to have you grinning in approval. 2.5/5

The Habit of Art will be showing from today at the The Brighton Theatre Royal until Saturday 15th September 2018. To find out more about the production, visit here…