Earlier this year artistic director Indhu Rubasingham announced that the Tricycle Theatre would be changing its name to Kiln Theatre as part of the much needed £7 million ‘Tricycle Transformed’ development project that has taken over two years to complete. 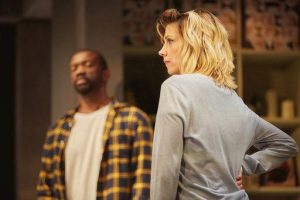 All hell broke loose amongst Tricycle evangelists, who in reaction to the name change, set up the campaign group ‘Our Tricycle, not your Kiln’- a passionate bunch who seem to believe Rubasingham has gone out of her way to turn the world-famous theatre into a ‘tragedy’.

Needless to say, the group had assembled en masse outside the Kiln on Monday night with placards and flyers peddling their cause prior to the world premiere of Alexis Zegerman’s Holy Sh!t– you couldn’t make up a more appropriate title to accompany the brawl of passionate devotees.

I spoke with the protestors outside the gorgeously renovated front entrance and they described their dismay at what they called the ‘lack of consultation with the community’ over the change of name. It’s as if Indhu Rubasingham isn’t a successful artist, business woman and community campaigner in her own right capable of making her own decisions.

But nothing can swamp the gorgeous renovation that has happened to this former dated theatre. Rubasingham has masterfully completed an architectural facelift that puts any London arts venue to shame. Say farewell to the former student union-esquebar and hello to the swanky Kiln Kitchen and new café. Gone are the dingy, godawful lavatories. Instead, the Kiln has caught up with the times and introduced gender neutral toilets. And praise be, the theatre that was once framed by an awful orange scaffolding structure that trapped audiences in a 1980s avant-garde hell hole has been replaced with a modern, impressively diverse auditorium set up.

But this certainly isn’t a review for World of Interiors magazine. Rubasingham’s first production, Holy Sh!t at her new theatre is a darkly comic four hander that asks the question, how far would you go to do what you think’s best for your child?

Best friends Simone Kellerman (Dorothea Myer- Bennett) and Juliet Obasi’s (Claire Goose) would go to any length to get their four-year-old daughters, Milly and Sophie, into the best school in the area. The catch?The only decent school is Church of England meaning they’ll both have to curry favour with the vicar to even have a hope of gaining one of the few golden places.

A prickly move for Jewish Simone and her husband Sam (Daniel Lapaine). Adopting a fake-it-till-you-make-it approach, Simone does nothing but wow the church’s congregation (and the audience) with her belting soprano and even offers to teach the Sunday school, albeit only the first testament!

Myer-Bennett grasps her forty-something professional blogger character with such an ease that she allows Zegerman’s comedy to zing with a certain oh-my-god-I-cannot-believe-she-just-said-that.

However, the Christian Juliet becomes more and more aggrieved by Simone and Sam’s apathetic attitude to the church, and is exasperated by her husband Nick’s (Daon Broni) impartialness. Everyone’s relationship begins to crack when their daughters trade racially charged slurs at each other, which only plunges the parent’s warfare further.

Morals and belief systems are rattled and flipped upside down in Zegerman’s zippy play. The struggle for the two couples to deal with their middle classness and hold back their own prejudices is nothing ground breaking, but provides weaknesses in the characters that we can all laugh at.

Nick’s final speech allows Broni to totally steal the second act. The cracks in Nick’s exterior begin to crumble when we learn why he feels he must be so bloody open-minded about everything and puts each character’s privilege into perspective.

This caustic satire certainly isn’t a showstopper, but it’s pumped with the same electric, political charge that the Tricycle became so revered for. Surely it’s the creative forces behind a venue, not the name that makes a theatre so special? But at last, Kilburn has one of the most fantastic theatre’s London has on offer!  4/5

Holy Sh!t is currently showing until Saturday 6th October 2018 at the Kiln Theatre. To find out more about the production, visit here…