Where have we come from and what are our responsibilities to each gay generation after us? At a grand total of 6 hours 40 minutes, The Inheritance is a marathon of a play that aims to pin point what it means to be a modern gay man in today’s western society. 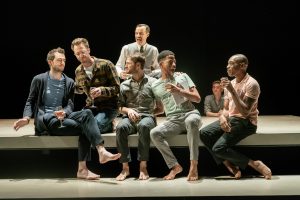 Divided in to two parts, Matthew Lopez’s beast of a story centres, primarily, on the life and loves of the handsome but lost couple Eric Glass (Kyle Soller), Toby Darling (Andrew Burnap) and their gaggle of thirty something Meryl Streep loving friends.

Narrated by the entire cast, including the irresistibly captivating Paul Hilton depicting E.M Forster, who presides over the young men as an omnipresent mentor.This is a play where worlds and friendships spiral, smash and collide with beauty and venom.

The play’s six acts expand far beyond anything that could be written up in a review of this kind, but director Stephen Daldry manages to make the piece tick, keeping sharp focus throughout.

Part one tackles the fallout between social justice start-up founder Eric and cocksure writer Toby whose dark past is yearning to be healed. Lopez paints their life together as a hedonistic dream, a great apartment in New York, an abundance of friends pouring large glasses of white wine and the hottest sex imaginable. But let me assure you dear reader that contrary to popular belief, no gay couple have ever had all three.

All this sex and romance takes a tumble when they meet hot young twink Adam who’s dying to be taken seriously in the world of theatre and will do anything for the lead in Toby’s new play. How refreshing for the old ‘predatory gay’ cliché to come out in full force.

At times Lopez writes such acidic verse that Toby and Eric’s spitting rage feels palpable. What a shame though that a lot of the script is crammed with guff that often confuses this performance with a cringey gay romp- full frontal nudity and a six pack anyone? Well it wouldn’t be a gay play without it.

However nothing can be critiqued with Lopez’s enthralling monologues. They are full bodied, powerful and allow the complexities and flaws of a character to shine. Take Walter (Paul Hilton) who has remained by the side of partner and Republican Henry Wilcox (John Benjamin Hickey) for 36 years despite Wilcox trying to hide and shut out the deaths of hundreds of their friends who took shelter with Walter during the 1980s Aids crisis. Later, in part two, we discover from Wilcox himself why he took such a stance, an ingrained fear and protection of his family which drove much of the hostility at the time.

A large amount of the audience are visibly taken by the piece. For most in the audience a living memory of the Aids crisis would be ever present. As a millennial, It’s hard to comprehend just how haunting the epidemic was, but the closing moment when all the young men who died in the care of Walter float gracefully onto stage feels poignant and fitting, if not a tad hammed up.

Part two is fraught with similar electric emotion, only the steeliest of viewers could watch both parts in one day without being overcome with an exhausting sense of grief.

The casting of Vanessa Redgrave is possibly the most pointless, yet most brilliant part of the production. A camp money spinner that keeps you hanging until the final act where she’s allowed to shine. Despite the idle gossip I habe heard, Redgrave does a fantastic turn as the reformed homophobe Margaret who is still mourning the loss of so many during the Aids crisis.

The Inheritance is a play that when written was crying out to be a film. There’s no strong argument as to why this needs to be quite so long. Lest we forget that the six acts are heavily reliant on the woes of handsome, muscly white men.

Lopez discusses in the program notes that he was part of the ‘only Puerto Rican family’ in his town, the only ‘gay kid at [his] school’ but this outsider-ness doesn’t fully translate. Spanning over six hours, Lopez does put himself on a pedestal, which makes the abundance of clichés all the more tiring.

At the heart of this epic is a story of people running away from the truth. Whether that be hiding from illness, loneliness or even the reality of their past decisions, Lopez tackles a great deal and does offer suggestions to the questions he poses. It’s a meaty play which could easily cut off some of the fat to allow it to be a concise, hearty discussion of modern day love and morality. 4/5

The Inheritance is currently showing until… at the Noël Coward Theatre. To find out more about the production, visit here…