Currently showing at The New Diorama after a well-received Edinburgh run in August, Breach Theatre’s It’s True, It’s True, It’s True is based on the translated transcripts of the 1612 trial of Italian painter Agostino Tassi, in a case brought against him by Artemisia Gentileschi, a female painter who he had raped whilst serving as her tutor. 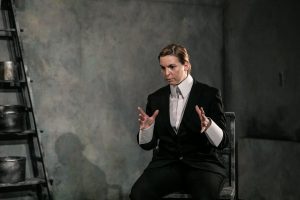 The set consists of a stark and sterile painters’ studio, also doubling as a courtroom, with the three performers alternating positions to present the transcripts. The play’s opening strikes a familiar tone, utilising the conventions of televisual court procedural dramas to heighten the immediacy of the matters at hand.

The characterisation is impeccable from the off, every glance and mannerism is precise and heavy with meaning, and the underlying power dynamics at play are instantly apparent. Harriet Webb is arguably the standout, her Tassi is the embodiment of smug, entitled western male privilege. He is grotesque, but portrayed with such accuracy as to never stray into out-and-out caricature. Anyone still unconvinced of the upsides of gender-blind or cross-gender casting would do well to watch Webb and the rest of the company in action.

Needless to say, the issues explored in this production are bitingly relevant and the company clearly revel in placing the characters and their actions in a contemporary context. However, Breach do much more than merely point out the parallels between the 1612 trial and its modern-day equivalents. They are concerned as much with the political and psychological power of art and representation as they are with the fundamental problems of the judiciary system when it comes to serving the victims of rape.

Gentileschi’s works provide rich ground for exploration; her paintings were apparently presented at trial as evidence of her reputation as a woman and of her mental state. Breach cleverly embodies two of Gentileschi’s paintings, the first, her version of Susanna and the Elders, exhibits Gentileschi’s awareness of, and reaction to, hegemonic male representations of the female body in renaissance painting, articulating conceptions of The Male Gaze hundreds of years before such theories entered common parlance.

Breach deftly find humour where they can, with many finely stitched comic touches that offer relief without undermining the harrowing events of the story, in fact the irony often works to heighten the shocking realities at play. I for one won’t hear the Benny Hill theme, or view images of Susannah and The Elders in quite the same way again.

It’s True, It’s True, It’s True threatens to finish on a bleak note, and would be perfectly justified in doing so given how little has progressed since Gentileschi’s ordeals. However, Breach choose instead a moment of catharsis via an expression of female frustration, thus mirroring the choice of Gentileschi herself to “Channel rage into action”, most notably in her depiction of Judith and her servant. This painting becomes the final image to be recreated on stage in a potent and urgent moment of defiance, that is also aware that the fantasy is not enough. As the words of a more recent artistic example of female empowerment and reclamation:Patti Smith’s iconic version of Gloria ring out in the auditorium, I struggle to imagine a more fitting way to endthis sophisticated, effective and moving production. 5/5