Morning in Byzantium is the second Kammerspiele Production by New York director and choreographer Trajal Harrell. Whereas Juliet & Romeo focused on youthful death, Morning in Byzantium sees the end of life as only one of various possibilities, and the director chooses life. 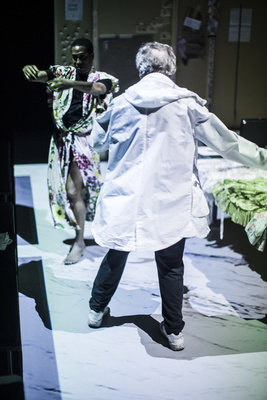 As a child Trajal Harrell was intrigued by a TV series called Morning in Byzantium, which took place during the cold war. The characters faced the danger of imminent nuclear annihilation before the hero eventually saved the day. This story made the young Harrell realize that life was precarious and fleeting. One false move, and it could all be over. He had a similar theme in the gardener who is aware that his work can be undone by one devastating storm. The roses that he tends with so much care are fragile and their blossoms are only temporary. Harrell combines both themes with the story of Orpheus and Eurydice, two lovers who know that if he turns around to look at her, that one false movement will send her back to the underworld forever.

The protagonist of Morning in Byzantium is a man who is almost 80 years old, played by Walter Hess, the character through whose eyes this evening is seen. He is already on stage as the audience is taking their seats. As the performance begins, his younger self enters and distributes texts in German and English to the audience. Trajal Harrell often intertwines poetic texts and prose with the choreography of his production. The rest of the performers follow, exploring the snow white stage with its two platforms, including one fountain designed in the Japanese style (stage design by Erik Flatmo and Trajal Harrell). Walter Hess begins talking about himself as a young man, a depressive gardener who is entranced by the beauty of a rose that opens longer on this day than expected. Hess is reciting a text by Hanya Yanagiharaabout a gardener who is living in a constant state of humbleness, a text both poetic and strangely enchanting.

Choreographed by Trajal Harrell, the cast comment on the transience of life using movements that are heavily influenced by Voguing and the Japanese Butuh-Dance. Voguing, a gay subculture in Harlem in the late 1960s, includes elements of the catwalk whereas Butoh is a dance of darkness that resists classical forms and toys with the ugly and grotesque as a contrast to today’s glorification of beauty. The actors are sometimes joined by Trajal Harrell, a graceful dancer who creates wondrous images with his movements.

The performers wear layers of fabrics and flowery dresses, creating a whole garden populated by birds as they parade before Walter Hess before taking off their costumes (design by Trajal Harrell) and covering him in dresses, the fabrics of his past life.

The dancing is accompanied by a variety of musical styles, selected by Harrell, yet the tone is often contemplative as in the scene at Byzantium when Walter Hess faces his middle-aged self, played by Stefan Merki. At the after-hours café alcoholic drinks were taboo in the wee hours of the morning but desserts, teas and drugs were freely available. Merki tells the story of Me Encanta‘s swan song, her final performance as a singer, and the first time she undressed in front of her audience. It was a brave act, and no one applauded. Me Encanta was aging, like the protagonist.

Rainer Maria Rilke‘s poem about Orpheus and Eurydice is followed by a parade of grotesques. The performers present absurd accessories on the catwalk, a nude actor is carrying a huge roll of bubble wrap whilst another who looks strangely deformed presents a small designer handbag.

Yet in the end, the fountain of life is bubbling again, rejuvenating Walter Hess as he performs a joyful and energetic dance, together with the rest of the performers.

A poetic and thought-provoking evening that delights the audience with a garden of colours and the intriguingchoreography by Trajal Harrell. 4/5

MORNING IN BYZANTIUM will return on 12th and 13th November 2018. For more info, click here…