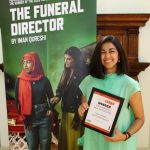 For a decade, the Papatango New Writing Prize has awarded promising playwrights that have gone on to pursue successful careers within the industry. Iman Qureshi is the initiative’s 10th winner, and there’s no doubt that she’ll enjoy a future of success too. Iman’s ‘The Funeral Director’ witnesses Ayesha, the director of a Muslim funeral parlour confront her sexuality and challenge her faith when Tom visits to organise his boyfriend’s funeral. A timely piece of writing tackling hot points within current conversations, Iman talks about the show’s debut at the Southwark Playhouse!

Hi Iman. You’re award winning show ‘The Funeral Director’ will debut at Southwark Playhouse from Oct 31st. How are you feeling ahead of opening night?

I am feeling nauseatingly nervous and find myself constantly doubting myself, my story, my writing. I suppose I have high expectations of myself, in that I desperately want people to connect with the story on an emotional level, and that’s no easy feat for any play. That said I’m really lucky to be surrounded by a ridiculously supportive and talented cast and crew, and that definitely helps quell the nerves that I’m told are inevitable.

The Funeral Director deals with religious values and sexuality. Why in particular did you want to explore these themes?

On a political level, I’m interested in the balance of competing rights. Where do you draw the line between freedom of sexuality and freedom of religion? It’s a question that even the highest courts in this country are still debating, and will continue to do so for many years to come. Religious institutions can still legally refuse to carry out gay marriages. On the one hand, that is unfair discrimination on the basis of someone’s sexuality. But the alternative is forcing religious institutions to carry out marriages they feel are against their beliefs. Either way, some people get what they want, while others are forced to compromise their own rights, relationships or beliefs. Who’s right and who’s wrong? Who has the authority to decide? And what effect do these rules have on people’s lives? I don’t know the answer and that for me makes for very interesting drama. On a personal level, I wanted to chart the journey of someone having to negotiate religious and sexual identities with empathy and nuance, without demonising people from faith backgrounds, but also showing how faith and LGBT identity are not mutually exclusive.

I don’t even remember how I began writing the play. I think it started with thinking up a character, and then speed writing a monologue for that character on Soho Theatre’s Writer’s Lab programme. My character was Ayesha, the protagonist of this show. I then went on to write a few pages of dialogue between her and another character who ended up being her husband Zeyd. And the play went from there. The version I submitted to the Papatango Prize was the third draft of the play. Since I was told I had won the Prize, there have been about nine more drafts – some significant reworking, some only with small tweaks. It’s also been such a pleasure to watch Hannah the director, and the brilliant cast make the show their own, and create beautiful moments of live action that I could never have imagined when writing the play. I wouldn’t even know where to begin staging this play – that’s why I’m not a director!

I really don’t know as I haven’t seen it set with an audience yet! The play is set in a divided town in the Midlands, so I hope London audiences will see a part of society that is quite different from the Britain they know. But despite that difference, also be able to connect with themes that are universal – love, grief, identity and self-realisation. Those are all really important themes in the play, that I hope are enlivened by a touch of gallows humour.

I hope they’ll be challenged. I hope they’ll be moved. And I hope – particularly for LGBT audiences from faith backgrounds – that they will feel loved. Is that a strange thing to say? Perhaps. But in many ways, this play is a love letter to any LGBT people who feel alone in this world.

Winner of the 10th annual Papatango New Writing Prize, the initiative has this year received a record 1,384 submissions across the UK and Ireland. How does it feel to have won this highly sought after prize?

Directed by Hannah Hauer King, how have you both worked together to realise the show?

Funnily enough, Hannah had already read the play and liked it, so we had met up for a coffee to chat about it before it ever won the Prize. Then, by chance, Hannah was at the Papatango awards ceremony where it was announced as the winner.  So it feels like we were fated to be the writer-director duo on this. It’s been such a pleasure to work with Hannah on this, and I think it’s a story as close to her heart as it is to mine, Hannah is also one of the most thorough and dedicated people I know, and has totally immersed herself in the culture and world of this play. I’m particularly excited about the music in the play, because I listened to a lot of Pakistani music while writing it, so it’s brilliant to see how Hannah has made sure that the production is steeped in that music.

What advice would you give to playwrights submitting work to playwriting competitions?

Write to deadline, but don’t let deadlines rule you. The play needs to be ready. I had my first play produced in 2013/14, and it took a good three years after that to start writing another full-length play. But when I did sit down to write it, it came quite quickly. But that’s because those years were spent percolating this idea until it was almost ready to write itself.

The Funeral Director opens on Wednesday 31st October 2018 at the Southwark Playhouse. To find out more about the production, visit here…