Bloomsbury Festival returned in October with a series of events celebrating the theme of activism and the architects of change, and featuring an array of performances showcasing talent associated with the area. I saw five shows in the NEW WAVE line up, each in the Bloomsbury Theatre’s studio space and all the first time they have been shared publicly. 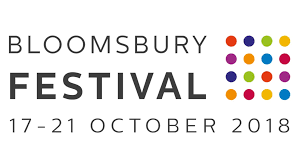 Saturday morning kicked off with Hop by PPS ensemble, an energetic devised show inspired by The London underground and consisting of a series of tube based vignettes. PPS are an immediately likable, talented ensemble and hurtle through a series of interactions and set pieces ranging from the comic, to the touching, to the disturbing.

Sharp, pacey and brimming with ideas, Hop offers a constantly surprising journey, all accompanied by a well-designed soundtrack. The show veers between subtle observational humour to high absurdity in the blink of an eye: A man suggestively eats a banana to the distress of a fellow passenger, a tightly packed group caress each other to a Bossa-nova soundtrack, and tube lines are embodied as competing beauty pageant contestants.

Irreverent, unexpected moments come thick and fast and keep the audience wanting more, but I also wanted to revisit the earlier characters. A tighter structure and a touch more conventional storytelling would invite the extra level of audience investment to allow Hop to really flourish.

Next up was Nocturne presented by The Vertical, the piece presents what I can best describe as a deconstructed Chekhovian existential meditation. Not pithy, but then this is a piece that foregrounds the inadequacy of language and defies simple description. 5 characters occupy the space with a variety of objects and instruments, performing a series of repetitive activities and physical actions, existing in a kind of emotional purgatory, they eventually begin to interact, but a tangible state of alienation persists.

A dark humour colours the piece, quickly putting the audience at ease and the clarity of performance elevates Nocturne beyond a dry exercise in the avant-garde; it is captivating but not for the reasons that durational theatre normally is. The search for meaning in which these performers are invested parallel that of their audience and demand our empathy, mainly due to the level of sincerity and rigour in their commitment as performers. As a result, I am wholly engaged, often moved, and would happily watch Nocturne for hours longer.

Sunday afternoon sees the debut of one woman show Unlovable by Carly Jurman. Jurman plays a dysfunctional 20-something singleton preparing for a dinner date, combining clowning and physical comedy, she battles with an instructional ‘voice from above’ who gradually switches from comforter to oppressor, all to a well-chosen 50’s soundtrack.

The show follows her struggle to wake up, get dressed, go shopping and cook a roast chicken for the object of her affectations, played out through a variety of prop based gags and comic routines. Jurman is a watchable, charming presence on stage but it is the grace with which she plays clumsiness and insecurity that I find most impressive. I am as much enthralled by her precision of movement around her cramped apartment set as I am tickled by her well-crafted comedic turns, it is a combination rarely seen in this kind of performance and I would love to see her pursue this highly individual style further.

Despite the consistent belly laughs, Unlovable builds to an unexpected climax, uncovering a much more affecting underlying theme that reframes the preceding events, before ending on a reflective personal note. It is a bold decision that clearly resonates with an appreciative audience who give a standing ovation to this honest, revealing and highly enjoyable show.

My final show on the Sunday is Glad to be Gay by Oliver Gaynor, in which three men discuss and explore themes of community and gay identity on the island of Jersey. The play utilises verbatim text and a presentational performance style to give a vivid impression of modern gay life on a small island.

This variety of storytelling methods is the piece’s biggest strength, switching from a played-out exchange on Grindr, to a snippet of recorded conversation, to a choreographed drag show. These fleeting insights create a cohesive whole, detailing a complex, multi-faceted relationship to life on the island as a gay man, which in turn is framed as something of a microcosm for the gay community at large.

It is a refreshing production with a genuine warmth, the direct address achieves a welcome level of intimacy. One comment I would make is that the play contains many reflections which clearly come from Gaynor himself, and I feel the text as it is demands the writer’s presence on stage as opposed to an actor delivering his words, it would at least add an extra dimension that would serve the piece well.

On the Saturday afternoon I also get to see Tom Kelsey’s Tiger Under the Skin, a solo show detailing one man’s struggle with anxiety over the course of a particularly eventful night out. In the name of full disclosure, I should mention that I habe a small amount of personal involvement in the show, so can’t offer too much in the way of unbiased criticism. But I don’t think any would argue with me when I say that Tiger Under the Skin is a brave, characterful and thoroughly engaging showcase of Tom’s many and varied skills as a writer and performer.

All in all Bloomsbury Festival: New Wave indicates that the area has an abundance of emerging talent and we can look forward to a varied and exciting future of work from the talented companies who performed in 2018.

Bloomsbury Festival took place from Wednesday 17th until Sunday 21st October 2018. To find out more about the festival, visit here…