Burying the dead is a much easier task than burying repressed feelings in Iman Quereshi’s four hander that bites at the complications of religion, culture and sexuality. Winner of the 2018 Papatango New Writing Prize, The Funeral Director is an imagining of how a young couple’s relationship and moral values are tested by the confines of their religion. 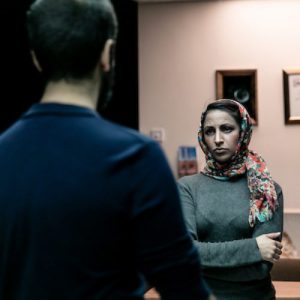 Ayesha (Aryana Ramkhalawon) along withhusband Zeyd (Maanuv Thiara) have inherited her late mother’s funeral parlour, the only Muslim funeral directors in a non descript ‘small divided town in the Midlands’. Surprisingly, business is slow- ‘you think this bloody cold would be killing people off left right and centre!’ It’s lines like these that pump Quereshi’s script with a good dose of dark humour.

Their religion comes to loggerheads when ‘gora’ Tom (Tom Morley) seeks assistance in organising a funeral for his Muslim boyfriend who has taken his own life. He bustles into the funeral parlour shaking, hoping the pair will fulfil his boyfriend’s last wish, but they soon cotton on that their relationship certainly wasn’t platonic, and tell him to seek help at another, non-Muslim funeral parlour.

The pair soon forget the event happens and carry on business as normal. Ayesha bumps into Janeyan “old friend” (yes, air quotes fully intended) who’s now a sassy, lesbian, human rights lawyer. The two haven’t seen each other in 11 years but surprisingly their conversation doesn’t flow nearly half as awkwardly as you might imagine – however, there is a growing tension that alludes to a hidden past shared between the two.

It’s here that Quereshi’s script almost hands the entire plot on a plate to the audience. There are no prizes for guessing what Ayesha’s “secret” might refer to and Janey’s profession as a human rights lawyer is sure to help with that small problem of homophobic discrimination that happened only a few short scenes ago.

A handful of moments feel contrived and there’s often not enough time for the drama to expand to its full potential. In some instances, Zeyd seems perfectly calm about the idea of having a gay son, but within the same breath he thinks performing a gay funeral would be bowing to the ‘kuffar’.

The script doesn’t fully explain the pressures Ayesha and Zeyd would face had they performed Tom’s boyfriend’s funeral. Rather the local imam, the Muslim community and the couple’s extended family are merely background figures used as excuses.

The outcome of the case doesn’t reach much of a climax either, instead it’s settled out of court, and on the whole brushes over quite quickly- impossible to believe if you think back to the gay cake saga, a four-and-a-half-year debacle that resulted in a Supreme Court hearing.

The Funeral Director juggles two plots, one about the extent of religious freedom within a modern society and the other, a Muslim woman struggling with her sexual desires.

The latter story is the more vital of the two, and more robustly written. Ayesha’s past with Janey not only lets her question her sexual identity but also debates her position and understanding of the faith she has devoutly followed all her life.

It’s refreshing to see a play with a strong queer Asian lead, which Ramkhalawon executes wonderfully. Quereshi approaches controversial topics with a tactfulness that examines strict Islamic teachings with a questioning eye. When Zeyd says if he had a daughter he would ‘encourage’ her to dress ‘Islamically’ Ayesha retorts that the daughter should be able to ‘make her own identity.’ It’s these scenes that roar with a fiery rebellion.

Clearly a writer to watch, Quereshi has written a brilliant piece that explores gender and identity in a way that offers a much-needed diverse narrative. However, the speed at which some of the scenes in The Funeral Director progress are sometimes detrimental to the believability of the plot. But her skill is in her ability to critique in a way that isn’t accusatory, rather she subtly pokes her characters to probe the questions that allow the true essence of her writing to come into fruition.  4/5

The Funeral Director is currently showing until Saturday 24th November at the Southwark Playhouse. For more information on the production, visit here…