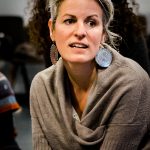 Four years ago, the European migrant crisis dominated the headlines. Images of migrants crossing the Mediterranean Sea in the hopes of escaping life threatening regimes and a poor quality of life in the hopes of starting anew were stark, shocking and eye opening. The media’s coverage of this period, at points unforgiving, demonised those seeking safety. The infamous Calais Jungle would also dominate headlines; the encampment at its peak, home to over 6,000 migrants seeking refuge. Director of Borderline Theatre Company Sophie NL Besse addresses the personal stories of refugees and asylum seekers in her latest show Welcome to the UK. Ahead of the show, Sophie talks about her time delivering workshops at the Calais Jungle, the multi-cultural ensemble consisting of refugees and performers and the show’s satirical aspect.

Hi Sophie, your production of Welcome to the UK will play from late January at The Bunker. How are you feeling ahead of the production?

We’re very excited about this great opportunity of a 4-week run. The whole group is buzzing with adrenaline, everybody’s helping on various things according to their skills. There are billions of things to do. But we’re very lucky, many people offered to volunteer to take over The Bunker next weekend and set everything up. It’s incredible the support we receive from everywhere really, it’s so heart warming and it gives me the energy to work twice as hard!

During 2015 you volunteered at the Calais Jungle where you delivered drama-based workshops. This would later inspire the creation of your theatre company Borderline. How was your time there?

It was very nice in some ways and terrible in some others. I was gobsmacked by people’s resilience and ingenuity, how they had managed to build a whole town with nothing. You could find everything in the Jungle: a church, a mosque, the best Afghani restaurants, a barbershop and even a hammam. I loved that, this energy to survive and find some enjoyable moments no matter what. I found it in the workshops that I led too: a thirst for comedy as a way to express and forget the tragedy they were trapped in. I remember one day I came to Calais with a musician friend of mine and a lot of instruments as it was Persian New Year. The police for some reason decided that no one was allowed to bring anything in that day. When I told the bad news to the people I knew in the Jungle, they just couldn’t accept that. They wanted a party even if it was in the mud and in the freezing cold. They smuggled the instruments in and did a big campfire in a remote spot of the Jungle where the police would not see us, and we sang and danced for hours!

The Welcome to the UK ensemble is comprised of performers who have recently sought refuge within the UK as well as performers brought together by PSYCHEdelight. How has the Borderline Theatre Company worked together to devise this topical piece?

Borderline is a cast of 16 people: 9 refugees and 7 European performers. Most of us knew each other really well already as we’ve been touring our first show for two years now. But it was the first time we were working with women refugees and this has been quite a journey. We met them through our producer, Rebecca Hayes Laughton, who also runs several workshops with the Women for Refugee Women drama group. These women came with a very painful story to share – in the name of many women here in the UK – a story of women trafficking. Despite the eagerness to all work together, there was a slight distance from both sides for a couple of weeks, probably coming even more from us: a fear to hurt them, to say the wrong word, even to touch them. It felt indecent to look for humour around a theme such as women trafficking. But then I  realised that we were just like how people often are towards refugees: we were feeling a bit scared and very sorry for them. And that’s what we’d been fighting against for the past 2 years, so our attitude towards these women had to change. They were brave, strong and beautiful and if they were ready to work with us on a satirical project, I had to embrace that and enable them to do so, in a powerful, proud, fun, and moving way. Once this shifted in our heads, the group bonded very quickly and we started devising on what was ‘the UK’ was for us. Soon appeared a fun fairy world with traditional British characters such as Mary Poppins and Harry Potter, but also a panto villain accordionist Prime Minister and a haunted house where our women friends were trapped.

Welcome to the UK explores the migrant experience and the hostility that migrants are faced with. How did the cast find exploring this particular aspect?

It was a very interesting one, as for this new project European performers were affected by the hostility too, even if it’s on a very different level. In Welcome to the UK, we mainly follow asylum seekers and refugees’ experiences going through the various rides created by the hostile environment policy, but we do also address Brexit. I think our refugee friends were so happy not to be the only ones struggling with Home Office anymore, that they absolutely wanted this shared in the show as well! Again I found it very thought-provoking because even if, as a French citizen myself, I’m very worried about Brexit, I didn’t want to steal the focus away. But then I realised that it’s quite daunting to always be the one in the spotlight and that there is actually something quite nice, for our refugee friends, about us all being in the shit together!

Horror, humour, live music and candyfloss! And an ensemble of 16 very different people who found a common language to share their voice. Welcome to the UK is an ode to the UK we love: A satirical play with a Syrian, Sudanese, Armenian, Italian, Iraqi, Iranian, Zimbabwe, Gambian, Afghani and French touch! We will take the audience on an emotional roller coaster, but we’ll make sure they fasten their seat belt beforehand of course! All our shows are followed by a Q&A as well as an exhibition of our artist friends Habib Sayat and Majid Adin.

A better awareness of what migrants go through in this country, and a lot of positive vibes that will make them look at refugees and asylum seekers with a fresh eye.

I hope our shows, Borderline and Welcome to the UK, will be a first step towards getting rid of pity, fear and rejection, which, I think, are very dangerous for our society. I hope the audience will be impressed with and in love with the cast by the end of the show!

Alongside Welcome to the UK, the company’s debut show Borderline will also be performed. The show is a satirical piece exploring the Calais Jungle situation. What can audiences expect from that show?

Borderline is a testimony of their lives in the Calais Jungle with a satirical perspective. The performers recreate this world, giving life to what defined the Jungle for them: volunteers, policemen of course, but also police dogs, generators to charge their phones etc. Borderline is a piece of physical theatre/clowning. The only props they have are shoes. Lots of them. Because it’s not only their stories, but also the story of the millions of people who had to flee their home. It’s the story of their friends who didn’t manage to cross and who still live very precarious lives in France.

What advice would you give to anyone looking to create a piece of political theatre?

There are surely different ways to proceed but my advice would be to first research your project very well, and make sure that the content of your message is accurate and true because you have a political and social responsibility.

Second, and this is an extremely important point for me, make sure that the form conveys your message as well. In our case, I wanted to address several points: The fact that there’s a dark fascination around refugees, people talk a lot about them, but there’s actually very little opportunity for them to speak for themselves. The fact that asylum seekers are very isolated here in the UK and that it is important that we work towards integration. And lastly, the fact that the image associated with refugees is often very dark, tinted with fear and pity.

Once I had the points I wanted to highlight, I found quite quickly the nature of my cast and the genre of the play: it would involve refugees to empower them and give them their voices back, but it would also involve UK based people to help integration and convey a positive message to our audiences around this theme. Regarding the genre, I chose satire because humour brings people together and it enables to address very violent topics without generating pity nor fear.

This last question is key for me and thanks for asking it because people always tell me “Oh but actors can play any part, why wouldn’t they play refugees?” I feel that it’s not an acting question. Of course, actors can do that and there are a few successful films or plays who did it out there. No, it’s a political question. Migrants suffer from a lot of abuse on top of the horror they went through. People keep stealing their stories or pictures of them and often only to feed dark fascination. So it was very important for me to involve refugees and asylum seekers in the creation process and to choose a genre where language barrier wouldn’t be an issue so that they could be centre stage and not just waving in the background to say that you had a refugee in your cast. So to satire we added clowning, physical theatre and visual poetry and we created this show altogether with them and not only about them.

Welcome to the UK will show from Tuesday 22nd January until Saturday 16th February 2019 at the Bunker Theatre. To find out more about the production, visit here…