Playwright Nabilah Said talks about her show Inside Voices playing at this year’s Vault Festival! 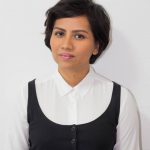 Within the past 2 decades, the gradual rise in Islamaphobia has been haunting to witness. Various misconceptions within the press further peddling a feeling of fear amongst nations. These untruths go on to shape voting outcomes and interactions within the wider community, fuelling a stereotype that doesn’t at all ring true. Nabilah Said’s timely show Inside Voices aims to add nuance to perceptions currently held. Placing lives of three Malay Muslim women at the fore, Nabilah and her theatre company Lazy Natives offer an insight into an aspect of Southeast Asian culture perhaps not focused on within the UK. Ahead of the show, Nabilah talks about making her professional debut at the Vault Festival, exploring topics of race and religion and featuring in Nick Hern Books’ Plays from Vault 4 Anthology.

Hi Nabilah! Your play Inside Voices will take part in this year’s Vault Festival. How are you feeling ahead of the event?

Honestly, I am a bundle of nerves as Inside Voices marks my professional debut in London. I feel like I have a lot to prove, coming from outside London, from Singapore, to stake a claim in this space I’ve been given and to not squander the moment. But I am also equally excited. The VAULT team have been super supportive and people, both in the industry and outside of it, have shown interest in our show, which only strengthens my resolve to champion Southeast Asian narratives in theatre. This is what we set up Lazy Native to do.

Inside Voices focuses on the social issues of race, religion and cross-cultural connections, why explore these themes in particular?

The kind of stories I enjoy tend to be very layered and I love exploring nuances in how race and religion is portrayed. With Inside Voices, though we’ve been talking about it as a “Muslim story”, the fact is that there’s no one way to be Muslim. In the play, we question faith, we talk about sexuality – these are some things that might be considered taboo when taken in context of talking about the religion.

Besides being Muslim, my characters, Nisa, Lily and Fatimah, are also Malay by race, which means their roots are in the Malay Archipelago. So a lot of their cultural embodiment – their comfort foods, their mythologies, their taboos – is informed by this geographical linkage to maritime Southeast Asia. That rich cultural diversity is one facet of Inside Voices that I look forward to sharing with the audience.

At the same time, these are contemporary characters living in the same world as you and I. These women are not here to be exoticised. Between the three of them, they’re also from different generations and have different belief systems about a lot of things, so it’s really about showing those nuances.

Inside Voices will explore these themes via dark comedy and magical realism. How did you approach creating the show?

At the heart of it, this is a play about three women sharing the struggles and joys in life. This could easily have been a serious play, but I really wanted to inject lightness, colour and energy into it all. And comedy is just a great entrypoint to talk about difficult topics.

With magical realism, I am really tapping into the more mystical, superstitious, and supernatural aspects of Southeast Asian culture. These make the show more fun to explore in a dramatic way as well, so we hope to create a spectacle for the audience.

The show was read at both Soho and The Arcola Theatre, with the latter resulting in it being selected as the top play audiences most wanted to see developed in full. What feedback did you receive about the reading/show?

We had really positive feedback from the audience at both shows. At Arcola, we were part of an event called Global Female Voices curated by Global Voices Theatre. I was holding my breath so hard during the reading of Inside Voices because I was so nervous – so I was very glad when audiences really responded to the piece and voted it as a play they wanted to see in full. The organisers called it “witty, enchanting and poignant”, which was really lovely. That was what made me want to apply to be part of VAULT. Coincidentally that reading was directed by Zhui Ning Chang, who will be directing this show at VAULT as well.

For the Soho Theatre reading, which was part of a graduate showcase for my MA in Writing for Performance at Goldsmiths, I didn’t know it at the time but an editor for Nick Hern Books was in the audience. When he contacted me later on to say that Inside Voices was selected for publishing for the Plays From VAULT 4 anthology, he called it a “standout piece”. With me being fresh out of school at the time, that feedback was really encouraging.

Inside Voices will shine a light on Singaporean Muslim women, ‘interrogating larger global conversations about Islamophobia and the #MeToo movement’, How as a collective have you found creating and sharing this piece?

We’re currently deep into our rehearsals. And one important thing to note is that we have a fully Singaporean Malay-Muslim cast, and the entire team comprises Asian women. So we are very much fiercely passionate about representing this community of women as authentically as we can.

One way we’re doing that is through the costumes, as we’ve partnered with a Singapore brand, Baju by Oniatta, which specialises in using traditional batik (patterned, dyed textiles) techniques to create contemporary designs.

We’re also staging Inside Voices in the Pit at The Vaults, with the audience seated in a round. This is our way of inviting the audience into the world of the play and creating a shared, intimate space.

It’ll be a mix of laugh-out-loud comedy with magical, dramatic sequences and tender moments. I truly think people have not seen anything like our show in London. I suppose the play is a bit of a provocation as well: would you watch a show about a community you probably have never thought of, or cared about?

I really hope they start to think more about Southeast Asia and our stories. Just to broaden perspectives, that would be great. With Inside Voices, I think I am trying to counter against not just Islamophobia and xenophobia, but also on a more personal level, showing people that there is more to Southeast Asia than what Crazy Rich Asians, or your beach holidays in Bali might have suggested.

Though the play portrays a community of women that are often sidelined, I also hope that people don’t come away feeling pity for these characters, or worse, feeling superior to them in some way. I really want to celebrate these women and the shared humanity we have.

Really think about what you can say with your play that someone else can’t. I generally find that I write best when I am angry about something too – you’ll be surprised by what a burst of anger can do to a blank page!

Inside Voices will show from Wednesday 23rd until Sunday 27th January 2019 at The Pit – The Vaults as part of this year’s Vault Festival. To find out more about the production, visit here…

« Previous post
Director of Borderline Theatre Company Sophie NL Besse talks about the company’s topical piece, Welcome to the U.K.
Next post »
Founders of the Fertility Festival Jessica Hepburn and Gabby Vautier talk about what to expect at this year’s event!