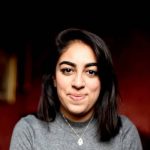 Born out of her own experiences of Ramadan in 2017, playwright Sara Aniqah Malik was inspired to create her debut show, SALAAM, an exploration of what it is to be a Muslim. In a day and age whereby media coverage focuses solely on extremist Islamic groups and as a result, building up a sense of fear within the nation that is in no way reflective of the faith, SALAAM will offer an insight into just how this stereotypical narrative negatively impacts lives. Placing focus on a mother and daughter’s relationship,  SALAAM will combine music and lyrical language to explore this very pertinent subject. Sara tells us more about the show, making its debut at the Vault Festival.

Hi Sara! Your show SALAAM will debut at this year’s Vault Festival from the 30th January until 3rd February. How are you feeling ahead of the show?

As with every show, a mix of excitement and nerves… and at the moment it definitely feels more nerve wracking than exciting! The production is not only my professional debut, but also a very personal story to me.
SALAAM tackles the issues of Islamophobia, mental health and gendered racial abuse. What drew you to explore these particular themes?
The show originated from my own experience of Ramadan 2017; it was a personally spiritually fulfilling month for me. Of course, not without its challenges – but it was the first time I made real progress in understanding my religion independently. When I was reflecting upon that time, I realised that those moments of serenity were a bubble; and that, outside, London was facing anxiety and anticipation of Islamist terrorism and I was troubled by this contrast.
How have you approached creating the show?
It started from a very simple and personal place of using the writing process to express intricate issues I wasn’t able to articulate fully. It was that process of articulation that led me to finding the characters, and from there, it was a matter of working with actors intensely in script development. Once I got into the rehearsal period and began directing it, it was a fun process of trying to ‘undo’ all the work I had done as a writer and start from scratch as a director. Directors are the best detectives so I had to find a way to make discoveries about my text!
SALAAM will combine live music and lyrical language to explore the themes within this political piece. Why choose these forms to explore these ideas?
As a Director, I have always been drawn to using live music in my productions and I’ve been fortunate enough to work with incredibly talented composers. The composer for SALAAM, Kristina Arakelyan, has written a score that is equally uplifting as it is heart-breaking. For me, music will always be able to tap into something words can never achieve. My first passion is literature so I love analysing words, but to lift the emotions beyond the page into people’s core through music is my ultimate goal as a theatre maker.
What can audiences expect from the show?
Audiences can expect to be entertained, moved, and – hopefully – fuelled. They can expect to be brought into the beautiful world of our mother-daughter characters, Mariam and Rema, and be enchanted by the live music which creates their world. They can expect to laugh, to be provoked, to be moved.
What would you like for audiences to take away from the show?
I want audiences to leave my show feeling that they’ve learnt something new, but that they also have a desire to continue that education process. I firmly believe that education is at the heart of solving bigotry; once we inspire people to learn about and unpick their internal prejudices, the closer we are to dismantling the wider system.
The show’s involvement within this year’s Vault Festival marks its debut. Are there any plans to tour this show afterwards?
We would love to tour the production! I am really interested in taking it to areas with a strong Muslim community. As of yet, we don’t have any plans – but I’m sure once the festival is done we’ll get our thinking hats on!
What advice would you give to aspiring playwrights?
I don’t quite consider myself a playwright yet as this is my first play! But to offer a few thoughts from my experience; never underestimate how valuable redrafting is. Get the first draft done and that’s when you have your story! Having said that, playwrighting is a different task compared to novels and poetry because you need to hand over your words to a whole other team of people. No matter how many times you redraft it in your head, things will radically change when an actor and director get their hands on it. I think there’s a real advantage in being able to work freely with actors in a room and make your play tailored to the specific conditions of that performance.
https://youtu.be/YLXbe6bgByY
Questions by Lucy Basaba.
SALAAM is currently showing until Sunday 3rd February 2019 at the Vault Festival. To find out more about the production, visit here…
Kristina Arakelyan, SALAAM, Sara Aniqah Malik, Vault Festival, Vault Festival 2019
31st January 2019by Theatrefullstop